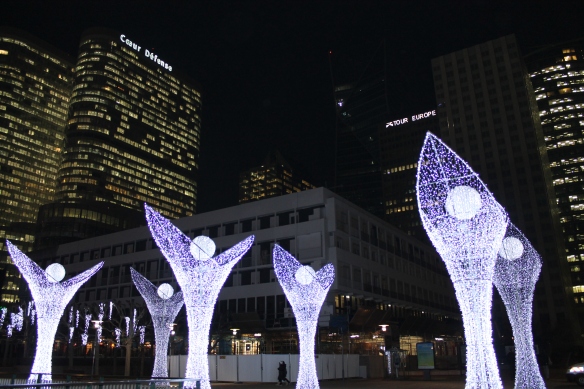 I like to stride along the Esplanade de la Défense because it’s a big, open space (with office towers on either side.)  But more importantly, it’s car-free.

If you peer through the ornamental arch and squint your eyes you can see, way in the distance, the Arc de Triomphe on the Champs-Elysées. It’s all in a straight line. The French are obsessed with symmetry. For them, symmetry and proportion represent harmony and order.

It’s all an illusion, of course. There was a national rail strike yesterday and all hell broke loose. Postal workers were also on strike.

The above photo and this one looks in the opposite direction towards the Grande Arche. All in a straight line.

For those unfamiliar with La Défense, there’s a big shopping mall called Les Quatre Temps at the foot of the Grande Arche.  I made my way along the Esplanade stopping every few minutes to admire the Christmas lights and take photos.  I’ve always enjoyed walking in the dark on cold, crisp, clear evenings. 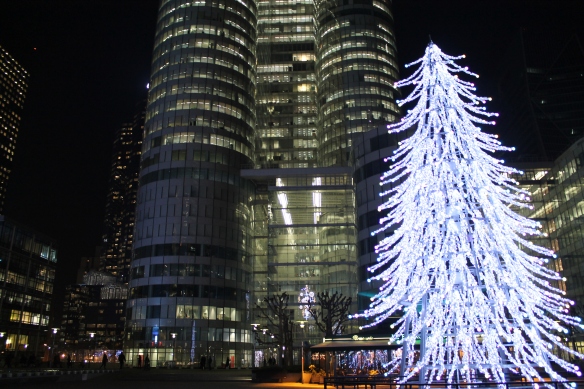 I don’t care what anyone says…I like La Défense. Probably because I’m North American and the “concrete jungle” aspect is familiar to me. Most people find it cold and dehumanizing.  This fountain below rises and falls to the sound of classical music. 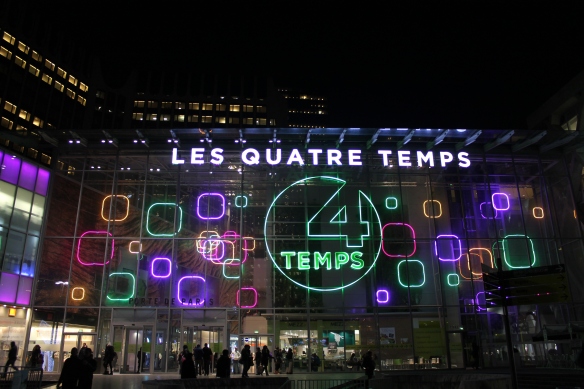 I’m guessing that the majority of tourists who visit Paris never venture out to the business district called La Défense located on the city’s west side.  If you do happen to go there (I recommend it), you’ll find yourself in a large, modernistic, automobile-free, open space amidst a forest of high-rise towers interspersed with low-rise apartment buildings.  At the very end of the long Esplanade are two shopping centers – the CNIT and Les Quatre Temps – containing a myriad of stores, restaurants, a massive supermarket called Auchan and a multiplex cinema.

La Défense is my backyard.  I live on the other side of the river and often walk to Auchan on Saturdays to do my grocery shopping.  I then walk back home with a very full knapsack on my back.  It’s a pleasant walk.  Walking is part of my exercise regime.  I don’t own a car. 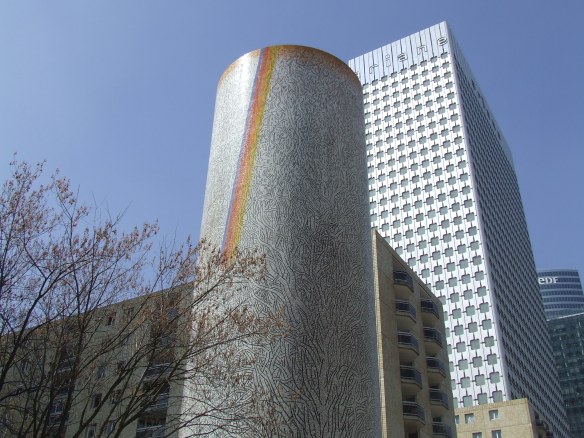 Now I know many people who say they loathe La Défense because of its concrete slabs and dehumanizing uniformity.  They say the place is devoid of charm or soul.  I happen to disagree.  I find a poetic expression in the design of the urban space here.  I think the planners have done an excellent job in humanizing the concrete landscape with the presence of outdoor art installations, grassy squares and benches, fountains (one which vigorously splashes up and down in tune with classical music played loudly on speakers), whimsical sculptures, seasonal markets, a summer jazz festival, etc.  A few years ago the Christmas decorations were sensational, but I’ve noticed in the last few years (since France has entered into recession) the municipality has cut back on such extravagances.

The best part is the absence of cars and lack of crowds; the entire space is dedicated to pedestrians.  I suggest that you get on the metro (the number one central line) and get off at metro stop Esplanade de la Défense, which is only 5 stops from Charles de Gaulle-Etoile station on the Champs-Elysées.  Then stroll the entire length of the Esplanade. You’ll be rewarded with a stunning symmetrical view of Paris behind you and the vista of La Défense with its cube-shaped, Danish-designed La Grande Arche in front of you (below.)  You can take an outdoor elevator up to the roof for a fantastic view.  If you walk around to the back of the Grande Arche, you’ll find an unexpected long, narrow, wooden footpath, similar to a jetty, that juts over a graveyard and the suburb of Courbevoie.

Here below is the CNIT building full of shops (Habitat, Decathlon, FNAC, a very good organic food and cosmetic shop on the lower level, Monoprix, etc.)  The CNIT is also a conference center. 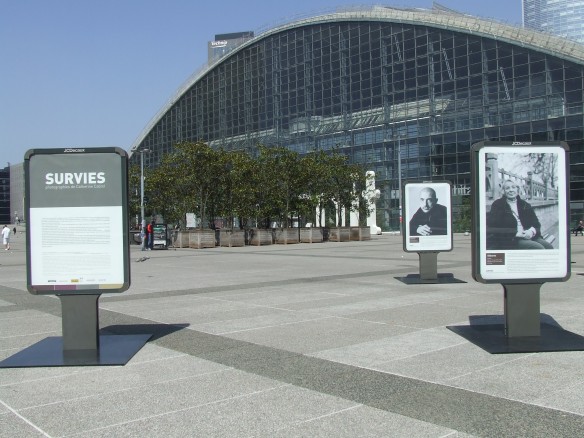 USEFUL INFORMATION – there are several hotels on the Esplanade: the IBIS, NOVOTEL, SOFITEL, HILTON and FRASER SUITES HARMONIE that sometimes offer special rates (depending on the season) lower than central Paris rates.  From La Défense, it takes 10 minutes to reach the Champs-Elysées on the metro.

FINAL WORD – I would advise against walking around this area at night.