Originally from Toronto, Canada, I moved to Paris about 20 years ago.

Virginie Despentes is a French writer. In this open letter, read aloud over the radio, she denounces the denial of racism and explains why “being white” constitutes a privilege. I’ve translated it for you.

In France we are not racist, but during the lockdown those who we saw being tasered because they failed to have the mandatory document that allowed us to go out were racialized women, in disadvantaged neighborhoods. White people, meanwhile, could be seen jogging and going to the market in the seventh arrondissement. In France we are not racist, but when we learned that the COVID-19 death rate in Seine Saint Denis was 60 times higher than the national average, not only did we not give a damn but we allowed ourselves to say between us “It’s because they confine themselves badly.”

I can already hear the clamor of the tweeters, affronted as they are every time someone speaks up to say something that does not correspond to the official propaganda: “What horror, but why so much violence?“

As if the violence is not what happened on the night of July 19, 2016. As if the violence was not the imprisoned brothers of Assa Traoré. This Tuesday, I’m going for the first time in my life to a political rally of more than 80,000 people organized by a non-white collective. This crowd is not violent. For me, Assa Traoré is Antigone. But this Antigone does not allow herself to be buried alive after having dared to say no. Antigone is no longer alone. She raised an army. The crowd chants: Justice for Adama!

Adama Traoré (19 July 1992 – 19 July 2016) was a French-Malian man who died in custody after being restrained and apprehended by police on his 24th birthday. His death triggered protests against police brutality in France. Assa is his sister.

These young people know what they’re saying when they say that if you are black or Arab in France, the police scares you. They are telling the truth. They tell the truth and they demand justice. Assa Traore takes the microphone and says to those who came “Your name has gone down in history!” And the crowd does not cheer because it is charismatic or because it is photogenic. The crowd cheers because the cause is just. Justice for Adama.

I am white. I leave my house every day without taking my identity papers with me. For people like me, it’s our credit card that we go back for when we’ve forgotten it. The city tells me I’m at home here. A woman like me moves around this city without even noticing where the police are. And I know that if there are three of them sitting on my back until I suffocate – for the sole reason that I tried to dodge a routine check – we’ll make a huge scandal out of it. I was born white as others are born men. I cannot forget that I am a woman, but I can forget that I am white. That’s what it’s like being white. Think about it, or not think about it, depending on your mood. In France we are not racist, but I do not know a single black or Arab who has this choice.

You can hear an audio version of this in French read by Augustin Trapenard on France Inter radio:

Liars and thugs, all of them. Nixon promised to end the Vietnam war, but he and Kissinger prolonged and expanded it by going into Cambodia. The resulting outcry across the U.S. led to a number of antiwar demonstrations—it was at one of these demonstrations that the National Guard fired into a crowd of (unarmed) Kent State University demonstrators, killing four and wounding nine. It was May 4, 1970. The event triggered a nationwide student strike.

Plus ça change plus c’est la même chose (the more things change, the more they stay the same.)

Sometimes the best analysis comes from far away. This from Australia. The current riots in America are about so much more than George Floyd’s death, they are a social rage born from twenty years of crisis in the USA.

In the words of political journalist, Stan Grant: A country at war with itself. The populist playbook. 9/11. Iraq. The George W. Bush presidency. Fault lines. Endless wars. The 2008 subprime mortgage crisis. Deep cracks of inequality. Barack Obama’s legacy is Donald Trump. And, of course, police brutality against African Americans for over half a century.

This woman has to be drunk. No sane, sober person could behave like this. Could they? The drunk woman called the other woman “a bitch” more than once. Unacceptable! I thought the group behaved admirably in the face of this repulsive Trump-lover. Did she not know she was being filmed?

I am horrified – aghast – we all are, at the terrible things going on in that once-great country. I used to go to the USA all the time, I have friends and relatives there; now, it’s the last place I want to visit. Your country scares the hell out of me.

“Make America great again!” said Trump. Are you kidding me?

All those senseless, egregious killings of black people … what the hell is going on?? How can those racist killer-cops do what they do with impunity? Why are they not serving jail sentences for murder? Where’s the justice?

Here are the latest casualties. Note that these three individuals were unarmed: Ahmaud was jogging. Breonna was sleeping in her bed. George was sitting in a car.

George Floyd, a 46-year-old man who died after a white Minneapolis police officer pressed his knee on Floyd’s neck for approximately nine minutes while he was handcuffed and lying chest down on the road.

Breonna Taylor, a 26-year-old emergency medical technician. Shot eight times inside her own home by Louisville police officers after they entered her apartment with a drug warrant looking for someone else.

Ahmaud Arbery, a 25-year-old man, killed by two trigger-happy residents while jogging in south Georgia. Gregory McMichael, one of the accused, was an ex-cop.

Since when is jogging, sleeping in one’s own bed or sitting in a car considered a crime?What were their crimes? That they were black? Is being black a crime in the USA?

And while we’re on the subject of crimes, let’s not forget the depraved President and his repulsive cohort-conspirator, Mitch McConnell. The following words come to mind when I think of them: evil, profiteering, morally-bankrupt, white-collar thugs. How anyone could vote for Donald J. Trump is utterly incomprehensible to me. In fact, it’s not even Trump I blame, it’s the people who voted for him and put him in the White House.

Taylor Swift tweeted this re Trump  – After stoking the fires of white supremacy and racism your entire presidency, you have the nerve to feign moral superiority before threatening violence? We will vote you out in November.

We used to love and even look up to the USA. No longer. The good times are a distant memory now.

It was wonderful to walk the streets and pop into shops again (like we used to.)  We’re not 100% out of the tunnel, but the light suggests that our terrible three-month ordeal is nearing its end. Hallelujah. God, it was awful.

Yesterday, my friend and I met up at W.H. Smith bookstore on the rue de Rivoli. It was a beautiful warm and breezy early-summer day, perfect for strolling. The streets and shops were near-empty, not because of Covid, but because this is a long 4-day weekend and many Parisians have left town. Thursday was Ascension Day, a statutory holiday in this country.

It’s obligatory to wear a mask on public transport. From W.H. Smith, we walked leisurely to the Marais, popping into shops along the way. The rue des Francs Bourgeois is one of the main shopping streets in the Marais district. 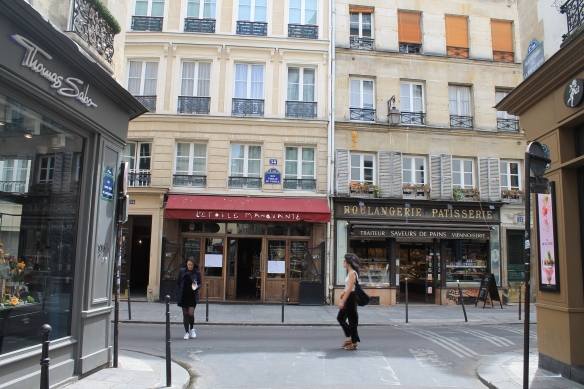 There’s a huge EATALY, opened exactly one year ago, located at number 37 rue Sainte Croix la Bretonnerie. Pre-Covid, you could barely get into the place. Yesterday we strolled in and it was near-empty. I purchased a bag of sun-dried cherry tomatoes, Lavazza espresso capsules (biodegradable) and a jar of tomato sauce with wild fennel.

We strolled some more and ended up at Mariage Frères, the temple of tea located at number 30 rue du Bourg-Tibourg. 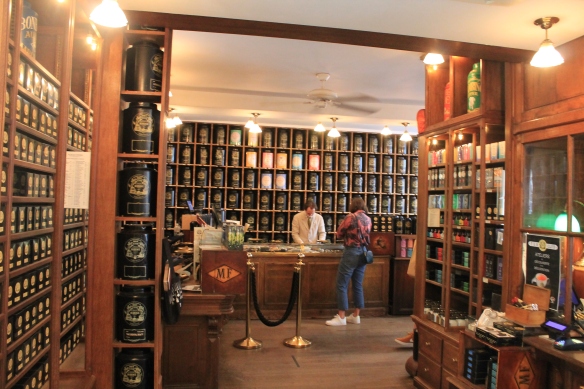 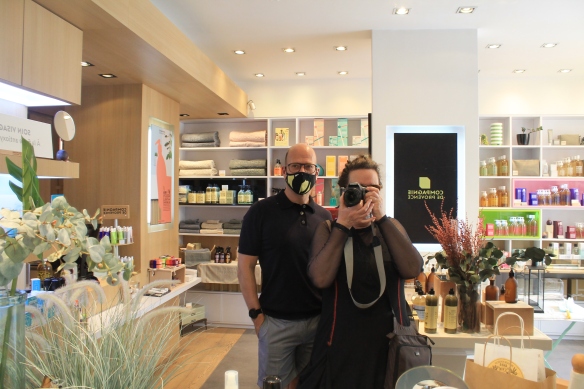 This Mexican place below used to be a French bistro, called Le Coude Fou, a favorite of mine for decades. Here’s what I wrote about it a few years ago –

It’s sad when your favorite places disappear. A lick of paint, a change of name, and it’s gone. Le Coude Fou means, literally, The Crazy Elbow. I can only imagine that this refers to standing at the bar, elbow bent, with a glass of wine in your hand.

Juliet in Paris
Blog at WordPress.com.