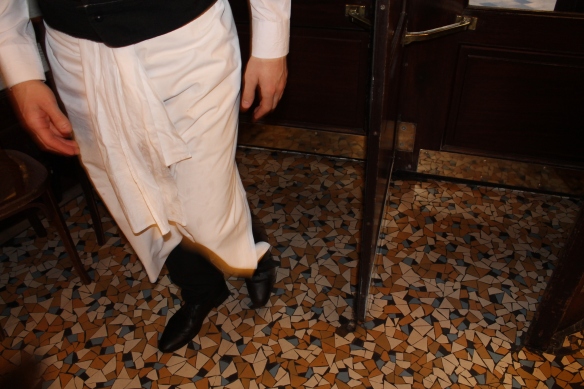 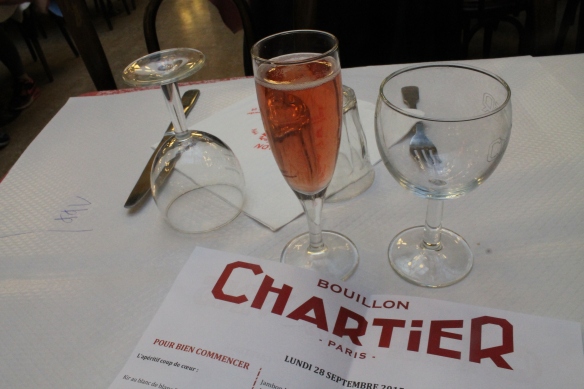 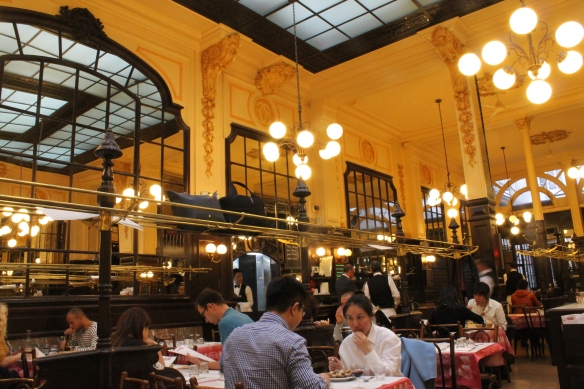 There’s something a little bit decadent about sitting in a half-empty restaurant at 4:30 pm on a Monday sipping a cocktail while waiting for your roast chicken to arrive. Because I’m usually at work at 4:30 pm on a Monday.  But today was my RTT day (basically, one day off a month).  And the weather was so beautiful I spent most of the day outdoors (a) exploring my old neighbourhood in the 9th arrondissement, (b) popping into Drouot auction house, (c) strolling the picturesque Passages, (d) shopping at La Marelle vintage boutique and buying a pair of fab Carel boots. But all that in another post. For now, let me tell you about Chartier. 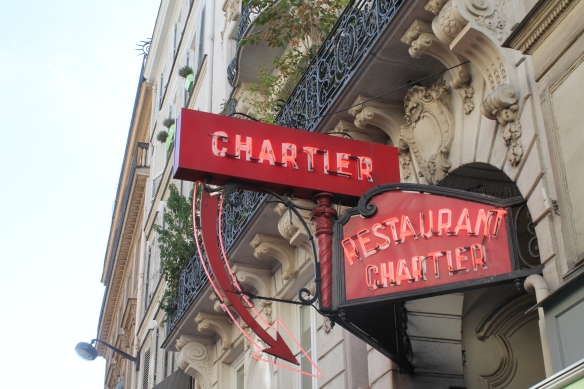 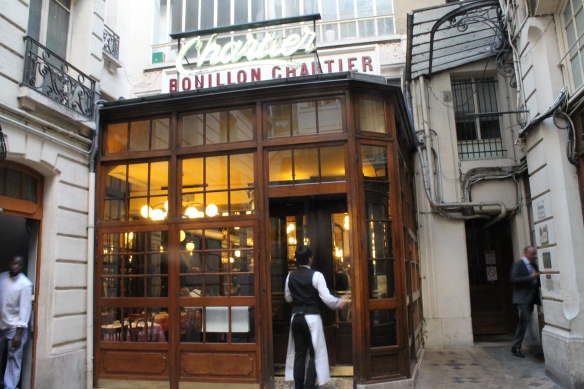 Here’s what Courtney Traub wrote on her Go Paris website – First opened in 1896 as “Le Bouillon Chartier”, a cantine for the working classes serving up simple hot dishes comprised of meat and vegetables, Chartier is now a much-coveted address for inexpensive French fare in a gorgeous setting. The restaurant, set near the bustling Grands Boulevards neighborhood, is housed in an imposing turn-of-the-century hall decked out on all sides with large mirrors, wooden panelling and globe lamps. Chartier is as famous for its inexpensive, basic dishes as it is for its congenial, teasing servers wearing traditional black waistcoats and white aprons, who scrawl your orders out on the white paper tablecloths in front of your eyes. 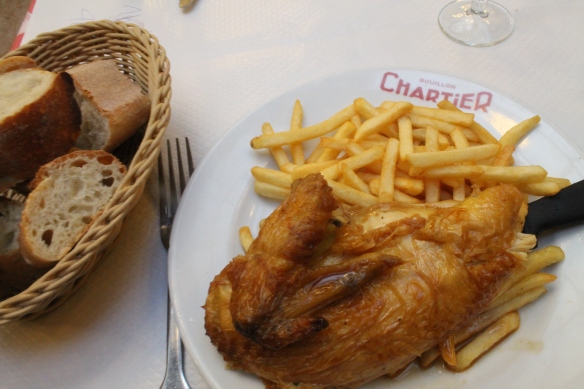 Cons:
•Reservations not accepted; long lines outside often await
•Quality of food is often rather mediocre
•Not ideal for intimate tete a tetes: tables are often shared with other patrons
•Very few vegetarian and vegan options

OK, so you don’t come here for superlative food, although I must say that everything I ate and drank was delicious.  You go for fun, ambiance and low prices.  It’s what my mother would call “cheap and cheerful.”  It gets very crowded at night, especially on weekends.  I went today because it’s in my old neighbourhood and I hadn’t stepped foot in the place for 12 years.  And at 4:30 pm it was quiet: a perfect setting in which to sit, take stock of your life, and relax. (hours are non-stop from 11:30 am to midnight, seven days a week) 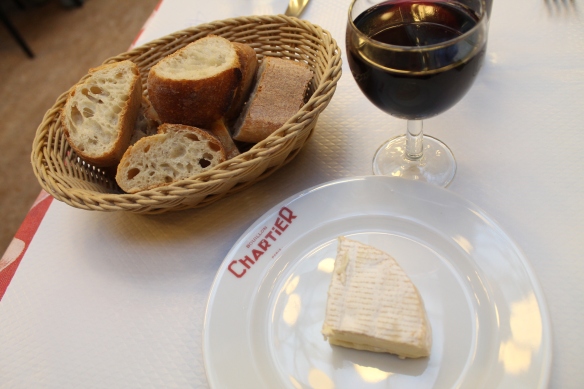 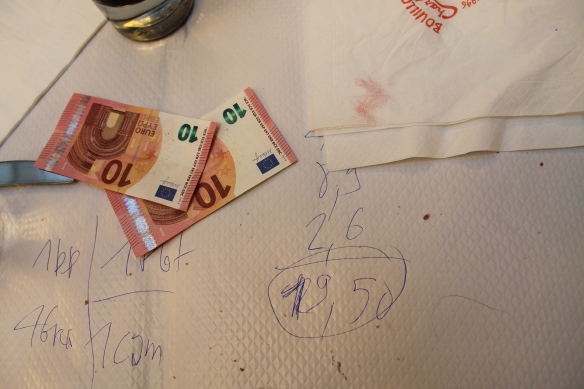 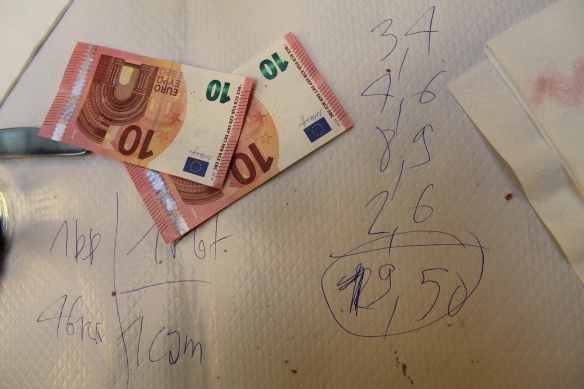 So go.  Drink wine.  Eat chicken.  Chat with your neighbours (some tables are shared.)  Enjoy life.

We are not only targets of terrorist attacks, but of lightning strikes as well. The world is a hazardous place. The headlines right now in France are ten children were struck by lightning at an outdoor birthday celebration leaving six seriously injured. They were in a Paris park which happens to be my favourite, the Parc Monceau. At around 3 pm today, a clap of thunder SO LOUD causing me to leap out of my chair with fright sounded over the city. It was followed by a déluge of rain.

The group of children and adults were having a birthday picnic in the park. Naturally, when the rains came, they ran for shelter under the trees. This was a mistake. As I type this, three of the children and an adult are hovering between life and death.

The Worst Places to Go in a Thunderstorm

If you’re caught in a thunderstorm, resist the temptation to hide under a tree. Trees are typically the tallest objects around, making them perfect targets for lightning and one of the worst places to seek shelter. If you’re near one, the lightning can jump over to you and follow your body on its way to the ground.

Conductors of electricity are highly dangerous during a storm. Avoid any electrical fences, wires or poles or industrial machinery. Water is also a conductor, so stay away from ponds, pools, puddles, streams, etc.

The illustration above shows you the best position to assume if you’re caught in a storm. In a nutshell, here’s what you should know:

If You Can Make It to Your Car, Go There

We are currently enjoying a 4-day weekend here (and the weather is glorious).  Why are we enjoying this long weekend?  Because yesterday (Thursday) was Ascension Day.  Next weekend will be a 3-day weekend because of Pentecost, otherwise known as Whitsun or Whit Monday.  I had to look up the meaning of this event.  Here’s what Wikipedia says – Pentecost Monday is a Christian holiday which commemorates the descent of the Holy Ghost upon the disciples of Jesus Christ, according to the New Testament of the Bible.

Oh, and August 15th is another national holiday – The Feast of the Day of Assumption.

The Catholic Church adopted this date as a Holy Day of Obligation to commemorate the Assumption of the Blessed Virgin Mary, a reference to the belief in a real, physical elevation of her sinless soul and incorrupt body into Heaven.

Sometimes I feel like I’m not living in France, but in the Vatican City.

Just out of curiosity, I looked up the dates of national holidays in Italy.  Italy does not recognize the first two above-mentioned holy days as cause for a national holiday. Neither do Spain or Portugal.  However, the day of August 15th is observed by all. 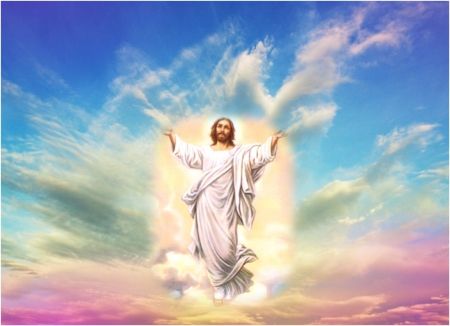 And I’m wondering…..why would Ascension Day be cause for a national holiday?  I mean, I can imagine it being a holiday in a religious institution or a private Catholic school.  But for the entire country to shut down on a Thursday to commemorate Christ’s ascension into heaven??

That seems a bit rich, especially when no other country does the same.

Firstly, I don’t see anyone around here going to church on Ascension Day.  Most people just seize the opportunity to take the Friday off as well and hightail it out of town. And secondly, FRANCE IS SUPPOSED TO BE A SECULAR COUNTRY.  So, again, why have these Christian holy days been decreed national holidays by the government?

Here’s why – because by observing them, which, by the way, is a blatant transgression of the country’s secular laws, they serve as a reminder to one and all (in case we forgot) who rules around here.  Separation of church and state?   I don’t think so.

(note – when I say ‘Christian’ I mean Catholic because Protestantism is only 2 per cent of this country’s population.)

But who’s complaining?  No-one.  You do not see protest marches in the street with citizens clamoring “We want less paid holidays!  Down with religious holidays!”

The word ‘secular’ in French is ‘laïcité’, derived from the word ‘laity’ which means non-clergy or layperson.  Dominique Moïsi, a French political scientist, said this – “Laïcité has become the first religion of the French Republic.”  Brilliant.

There’s a lot of hypocrisy and ambiguity surrounding the practice of this controversial word.  But that’s France.  Things are rarely straightforward here; much is cloaked in doublespeak, silence and subterfuge.

What’s important, though, is that in recent years the effectiveness of French-style secularism is being debated and criticized.  It is believed that French-style secularism masks a larger issue and this issue has a name.  Islam.  If you want to understand France today, and see how France’s new secular laws (the banning of the full-face veil, for example) are, in fact, linked to what is perceived by the French ruling class as an Islamist threat, read this informative article on the subject.

Is it Time for France to Abandon Laïcité?

A year after the ‘Charlie Hebdo’ attacks, it would appear that France’s strict secularism has only exacerbated religious and racial tensions.