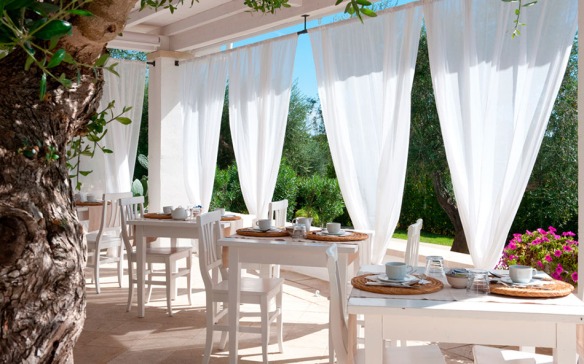 I’m disconnecting from the internet and escaping to Italy. To the south. To a region I’ve never visited, but have always wanted to explore. Deep in the heel of Italy, to Puglia.

I’m travelling light: a few books, my camera, sunscreen, light clothes and a writing pad. No phone, no laptop, no tablet. Just like the old days. Remember those days? Those carefree, uncluttered days? The idea is to work on my book project, but also to sightsee. And eat. And drink many caffès. And wander. And visit old churches and cathedrals. Of which there are many.

First stop: a secluded hotel among olive groves, near a coastal town called Otranto and the Adriatic Sea. Then onwards to Lecce, capital city known as the “Florence of the south” before meandering up the coast to Polignano a Mare. 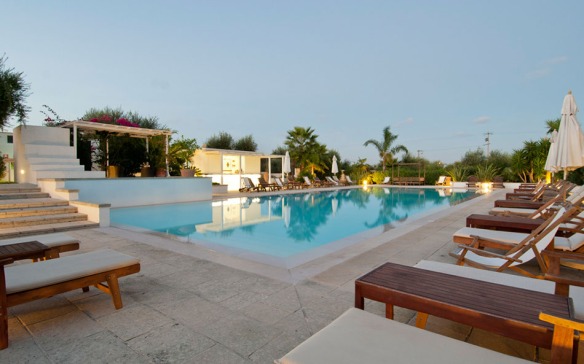 This ornate church in Lecce dates back to 1429 and is named Chiesa di Santa Chiara, the church of Santa Chiara.  My niece’s name is Chiara. 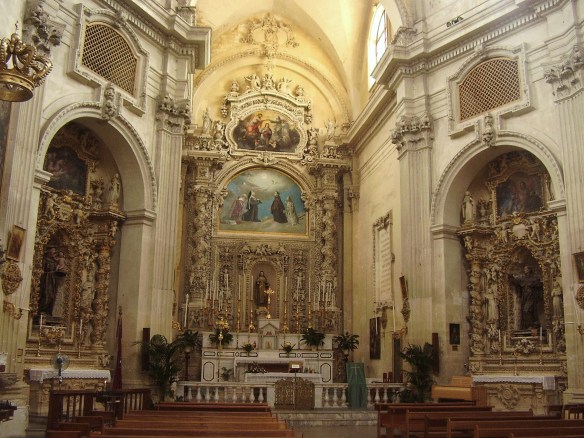 For as long as I’ve known Monique – which is 16 years now – she’s been talking to me about her favourite neighbourhood restaurant.  I’ve been intrigued by this restaurant but, for some reason or another, have never gone.  Today we went:  Monique, Lydia and I in celebration of Monique’s birthday. 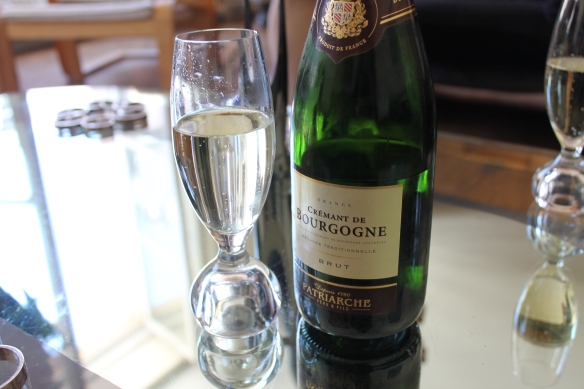 Rendez-vous at Monique’s apartment for sparkling wine on this sparkling pre-summer day. Once again we are spoiled with the weather and enjoying abundant sunshine, light breeze and temperatures of 20°C.

We admired Monique’s birthday gift from her daughter, a stunning Hermès scarf. 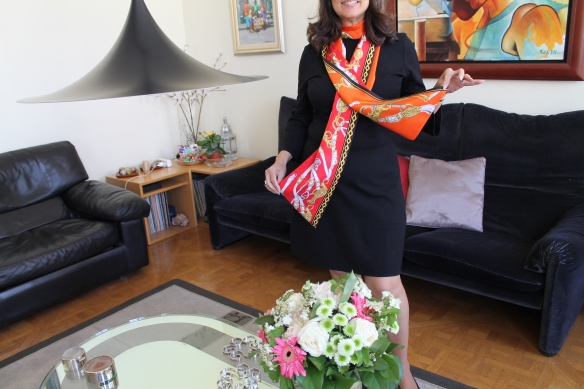 And then we trooped up the road to the Ambassade d’Auvergne where Philippe, the maître d’hôtel, was waiting for us.

So what, exactly, is this well-loved Paris institution? Specializing in country style cooking from the Auvergne region of France, I would characterize the food as earthy, rustic and substantial, what the French call “terroir“, which means “from the soil”. The Auvergne, known for its mountain ranges and dormant volcanoes, is in the center of France.  One of the least populated regions in Europe, its capital is Clermont-Ferrand.  I have visited most regions of France, but not this one.

Our meal started with a gigantic bowl of warm, lentil salad that was dished onto our plates (portions are very generous here). The green lentils are of Le Puy variety.  The salad was so delicious that we asked about the vinaigrette.  Philippe told us that they use walnut oil instead of olive oil.  I was so absorbed in the eating that I forgot to take a photo. 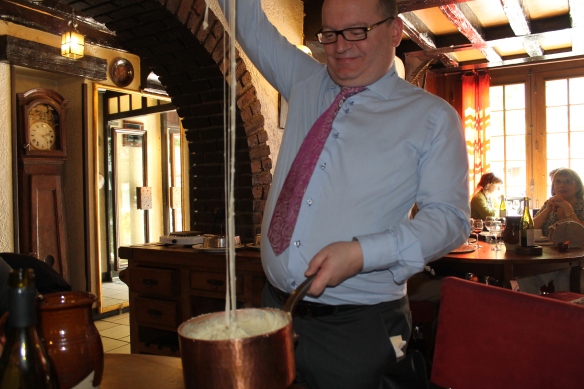 Next came a dish called aligot which is mashed potatoes blended with butter, cream, crushed garlic, and melted cheese. Traditionally made with Tomme de Laguiole or Tomme d’Auvergne cheese, aligot is a regional speciality served with grilled sausages or roast pork.  I had the duck.  The aligot is ready when it develops a smooth, elastic texture.

For dessert another gigantic earthenware bowl came out of the kitchen, this time filled with chocolate mousse.

A divinely dark chocolate mousse served with a tiny cup of espresso.  Heaven.  I’m not going to wait another 16 years before returning to this place, that’s for sure.

UPDATE 2016 – Monique says the restaurant is now under new management and everything has changed…..for the worse.  Very small portions, no longer served out of the huge bowls, higher prices.  She says she won’t go back.  Too bad.  She was such a loyal customer for two decades.

As I sat in my apartment feverishly working on my chapters (I’m writing a memoir), the sunshine cajoled and beckoned me outdoors.  “Viens, Juju…” it said, “Come outside and play!”  So out I went.

Under a perfect blue sky, I walked to my local Sunday morning market. The forecast for today and tomorrow is 17°C, slight cool breeze and abundant sunshine.

I am truly grateful – and sometimes ashamed – of the abundance in our lives.  Knowing that others do not have enough.

The word that comes to mind when I look at all this produce is surfeit (excess, oversupply).  In theory, prices should fall because of this superabundance, but I find outdoor markets (this one in particular) expensive.  What do they do with the stuff they don’t sell? 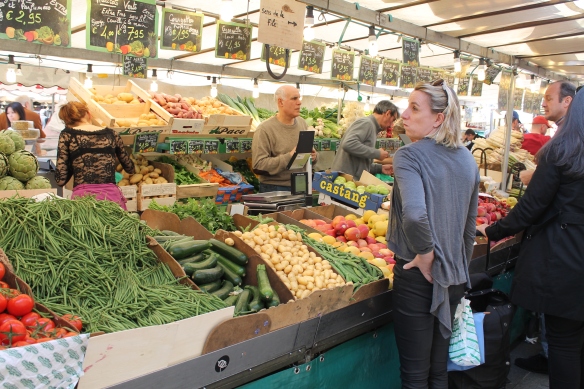 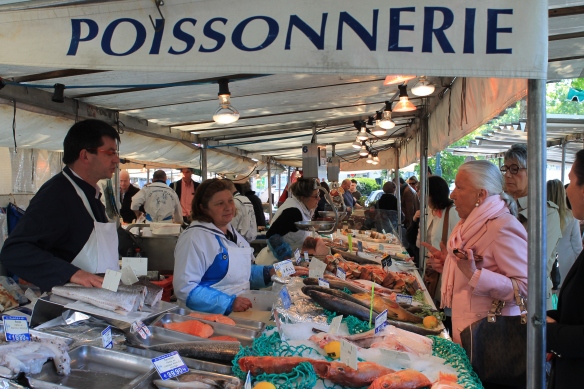 These mangos are outstanding.  Called “peach of the tropics”, they come from Senegal, the Ivory Coast, South Africa and Brazil depending on the season.

In the winter, strawberries come to us from southern Spain and Morocco. 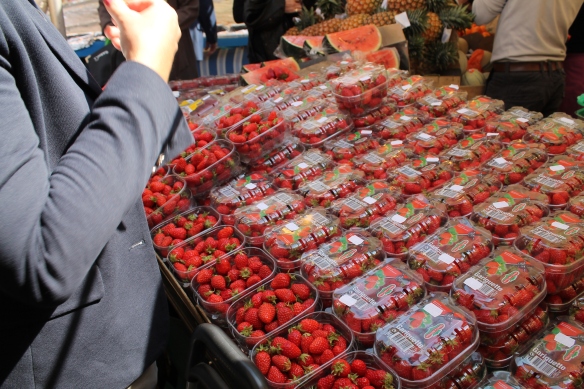 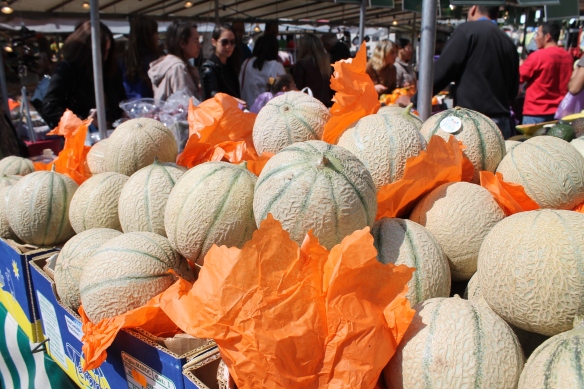 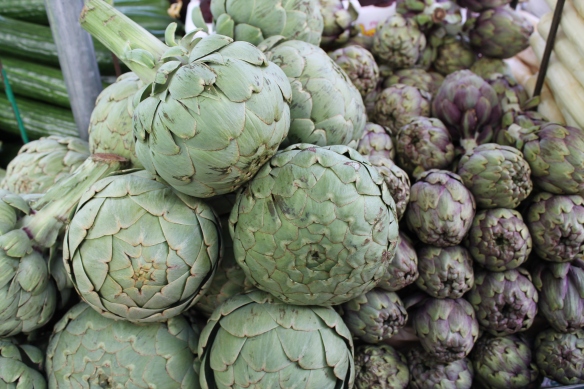 It was cool and rainy when I left the office two nights ago at 6 p.m. But instead of scurrying home, I jumped on the metro and headed to the Louvre museum. The Louvre is closed on Tuesdays. So why was I going? 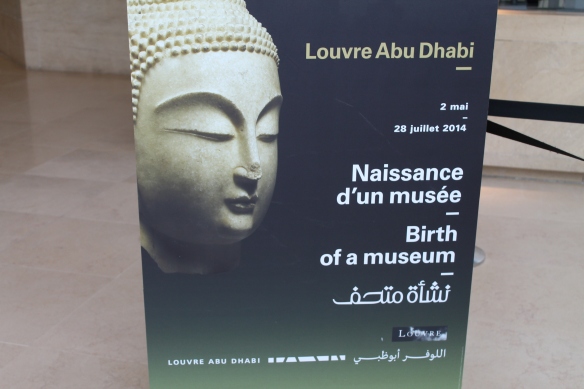 The company I work for is a patron of the Louvre, so I was given a ticket to attend a private viewing of the Abu Dhabi exhibition before it opens to the public on May 2nd.

So what exactly is the Louvre Abu Dhabi located in the United Arab Emirates (UAE), one of the oil-rich states that juts into the Persian Gulf?

Back in the 1990s, a lucrative deal was brokered between the French government and Sheik Sultan bin Tahnoon Al Nahyan, chairman of the Abu Dhabi Tourism and Culture Authority.

A museum would be built on Saadiyat Island in Abu Dhabi and will be part of an ambitious billion-dollar tourist and cultural complex.  Two other museums are planned: a branch of New York’s Guggenheim and a national museum.

Artwork from around the world will be showcased, with particular focus on bridging the gap between Eastern and Western art.

US$525 million was paid by Abu Dhabi to be associated with the Louvre name, and an additional $747 million in exchange for art loans, special exhibitions and management advice.

The architect of the Louvre Abu Dhabi is the well-known Frenchman, Jean Nouvel, and the museum is scheduled to open its doors in December 2015.  Here’s what it will look like –

The Paris exhibition featured 160 works acquired by Abu Dhabi for their permanent collection.  I’m afraid I was unable to take photographs of the actual treasures on display, but I saw some marvels that included a silver dish from the Tang Dynasty (618–907 AD), a bronze dancing Shiva from southern India (10th century), copper trays inlaid with silver and gold from northern Iraq (13th century), a mother of pearl jug studded with turquoise and garnets from India (early 16th century) and an astrolabe from 13th century Afghanistan, used to predict the positions of the stars. Further along was the modern collection comprising paintings by Manet, Mondrian, Magritte and Picasso, but I was far more bedazzled by the antiques.

We were a small group and it was nice not to be jostled by a large crowd.  As I stood and gazed at Giovanni Bellini’s 15th century painting of Madonna and Child whose sumptuous colours appeared as fresh and recent as if it had been painted only decades ago, I was joined by another woman.  In silence, we marvelled at the luminous splendour of this Venetian Renaissance masterpiece.  As I turned to move on, I looked over and saw that the woman standing beside me was Claudia Cardinale.

I highly recommend the Café Marly restaurant that overlooks the courtyard and I.M. Pei’s glass pyramid.  After touring the Louvre, you can have lunch, dinner or an afternoon snack here. Here’s a post I wrote in June 2013 about it –