In the French language, when a person dies they say they have disappeared. Elle a disparu (She disappeared.) La disparition de Jeanne Moreau headlined all the newspapers today and I was sad for many reasons. Une flamme s’éteint is another poetic French expression for the passing of someone: a flame is extinguished. And yet another, elle a rendu l’âme: she gave up her soul.

Tributes, accolades and homages have been pouring in all day here in France. The cultural TV channel, ARTE, is showing two Moreau films tonight back-to-back (and all throughout the week.) I’m watching the first one now as I type this. Le journal d’une femme de chambre, 1964, with Moreau and the great Michel Piccoli. I saw both actors, on separate occasions, during my ramblings around Paris years ago. Jeanne Moreau in a restaurant in the 14th arrondissement; and Michel Piccoli who burst into a métro car one afternoon, clearly inebriated and wearing a long raincoat, before staggering in my direction to sit lopsidedly on the seat beside me. His leg touched mine. I squealed silently with delight.

After more than 140 films, her curiosity remained unquenched, her look imperturbable: the lustrous hair, the resolute eyes, the sensual, sulky mouth, the slightly rasping voice. “This is what I am,” those features seemed to say. “Take me or leave me.”

Moreau brought to the screen a singular, inimitable verve, a petulance, and a shameless gaze. Her range was extraordinary and she illuminated such classics as Jules and Jim, The Lovers, Diary of a Chambermaid, and The Bride Wore Black.

Above all, my personal favorite Moreau film is La Notte (The Night), a 1961 Italian drama in which she played alongside the impossibly gorgeous Marcello Mastroianni. There’s something dissolute, complex, sauve and sophisticated about that film. Watching it in my early twenties made me want to go and live in Italy (To my regret, I never did. However it’s not too late …)

In closing, this clip of Jeanne walking down the Champs-Elysées at night in Louis Malle’s 1958 film Les Amants with the Miles Davis soundtrack playing in the background is pure French and pure Moreau. She was 30 years old.

As I sit in my small Parisian flat on this Sunday, my two fans blowing at cross-currents with me strategically positioned in the middle, I have just enjoyed what many people in France consume during the summer: cold gazpacho accompanied by a glass (or two) of chilled rosé wine. Délicieux.

There’s a popular brand in the supermarkets here that’s quite good. But when I learned that Alvalle is owned by PepsiCo, I decided to make my own. 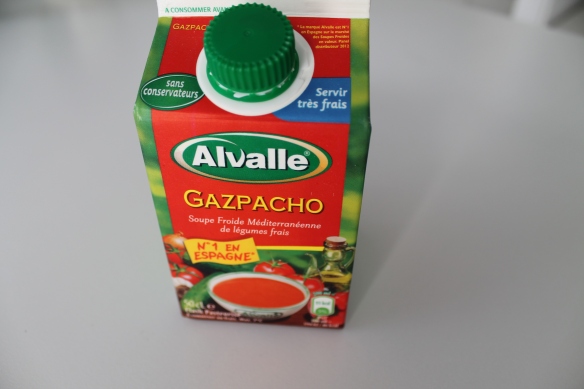 Nothing could be easier. For anyone on a diet, remember you’re eating raw liquidized vegetables. Most fruits and vegetables are free on the Weight Watchers program, so you can eat all you want (recipe below).

Rosé wines have enjoyed phenomenal success in the past two decades (much to the delight of wine producers.) The region of Provence is the spiritual home of rosé, but I enjoy a Corsican varietal. 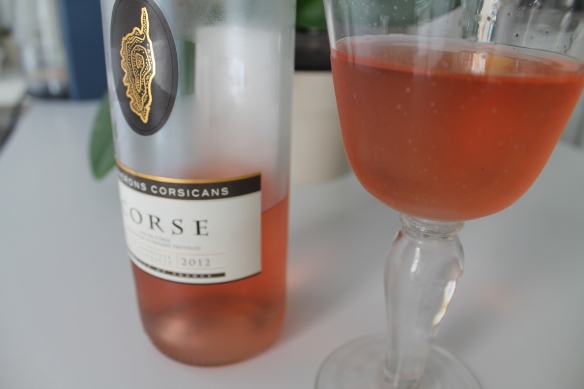 Don’t worry if you don’t have all these ingredients, I didn’t have the celery, parsley or Tabasco yesterday. Combine in a blender or with a hand-held mixer. Be careful not to overblend because you want it slightly chunky. None of the recipes I saw called for fresh basil. I added fresh basil.

Isn’t this a gorgeous photograph?  In the upper left background you can see the glittering Eiffel Tower.

And what is the Molitor, you might well ask.  Why, it’s the city’s most fashionable swimming pool, darling, and it has quite a history.  Constructed in 1929 in the 16th arrondissement of Paris, it was intended to resemble an ocean liner, with different levels, white railings and circular windows.  It’s a marvellous example of the Art Déco style of its time.

Future Tarzan actor, Johnny Weissmuller, was a lifeguard there.  He spent a season giving swimming lessons and rescuing damsel bathers in distress.

The Molitor is also remembered by Parisians for its transformation into a skating rink in winter.

“I remember a confined, very crowded place”,  reminisces Corinne, a Parisian schoolgirl in 1958.  “We used to turn endlessly, bothering each other.”

“It was a place where rich kids from the 16th arrondissement and Boulogne-Billancourt picked each other up.  All the girls wore crew neck cardigans buttoned on the back and Hermes scarves crossed in the front and tied up on their backs.”  Chic !

By 1989, though, the 60-year-old pool fell into ruin. The city of Paris didn’t have the funds to renovate, so it closed.  It became a venue for raves and a canvas for graffiti artists.

Oddly enough, 4 years later another famous swimming pool in Paris – the Deligny – which was a floating pool on the river Seine, would sink.  I used to go to the Deligny when I first arrived in Paris in the early 1990s.

But all’s well that ends well, my darlings.  Today the Molitor is swank – restored back to its former glory, but with a modern twist.  It’s part of a hotel.  A luxury hotel.  For many Parisians, though, it’s an unaffordable luxury. People can use the pool if they stay at the hotel (from 215 euros per night), join the Molitor club (3,000 euros per year) or pay for a one day membership (150-180 euros).

Here’s a beautifully-done video of the pool’s history and its sparkling new life today. Watch how the Molitor re-invents itself over the decades.  Chic !

A few summers ago I went to Arcachon, located just south of Bordeaux on the Atlantic Coast. It’s a favorite seaside destination of mine, easily accessible by a direct high-speed train from Paris. France is blessed with three coastlines: the Mediterranean, the Atlantic and the English Channel.

Here’s a two-minute video of the jetty which stretches out over Arcachon Bay. Just beyond is the island of Cap Ferret. I can smell that fresh, ocean air and hear the gulls wheeling overhead right now.

Below is a post with photos of Arcachon and Cap Ferret, as well as a good hotel recommendation.

Staring at a dozen ripe apricots this hot Sunday afternoon, I wondered what I could do with them (other than eating them, one by one, throughout the week.) An apple-apricot crumble sounded good, but it’s too hot to use the oven. So why not a coulis? Ridiculously easy to make, a coulis is a thin (or thick) puréed sauce. The word comes from the French verb, couler, which means to flow, trickle or run.

Using summer fruits is the best: raspberries, strawberries or peaches, for example, served atop a chilled panna cotta, cheesecake, vanilla ice cream, or just a bowl of quality natural or vanilla yogurt. Out of season, you can use frozen berries. The advantage of making your own coulis, or any recipe for that matter, is that you control the amount of sugar that goes into it. And the consistency.

I just looked up raspberry coulis on the Martha Stewart website. Way too much sugar!

I’d reduce that sugar to 1/3 of a cup, you can add more to taste later. And I wouldn’t let it boil for longer than half a minute because summer fruit is delicate.

Martha says – Combine sugar, berries, and 1/2 cup water in a saucepan; bring to a boil then reduce heat to medium low; cook until sugar is dissolved, about 8 minutes. Remove from heat; cool completely. Place mixture in the jar of a blender; puree until smooth. Pass through a fine-mesh colander, and discard solids.

I can’t be bothered to pass anything through a sieve, even though it’s a good idea because of the seeds. And I certainly wouldn’t discard the solids. A few drops of lemon juice and pure vanilla extract is good. Or vanilla sugar. The most important thing, though, is the quantity of water. Too much and your coulis is just a diluted, too-thin, insipid soup. So reserve some of the water from the saucepan, start blending with a small amount of water and add more, if necessary, as you whizz. Don’t forget that it thickens a little when you put it in the fridge. If it’s hopelessly thin, throw in a gelatin leaf.

This is a no-bake cheesecake. I like that the raspberries are kind of chunky. Obviously, very little water was used here.

Here are my apricots and coulis. I spooned some onto a bowl of natural yogurt, then later onto a plate of (home-made) crêpes sprinkled with lemon juice and granulated sugar.

During the week, I’ll put up a post about the re-opening of the famous Le Drugstore on the Champs-Elysées.