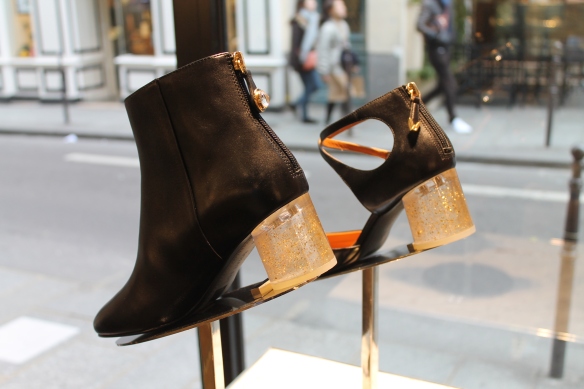 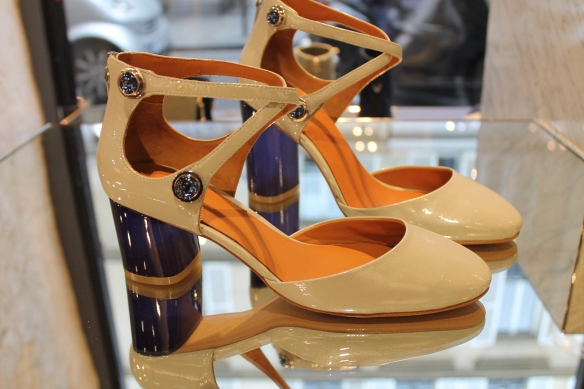 I met a friend the other day for hot chocolate at Pozzetto, the Italian café located at 16 rue du Vieille du Temple in the Marais district. Their hot chocolate is straight out of Italy: deliciously unsweet and so thick it’s almost pudding-like. They also serve tasty sandwiches and pastries. I like this place because it’s super-clean, friendly, and reasonably-priced. The nearest metro station is Saint Paul on the number 1 line. 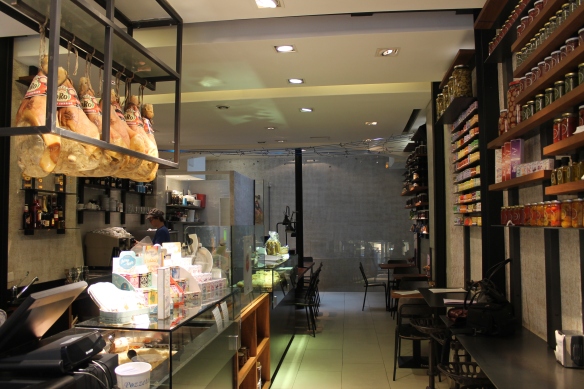 As we were leaving Pozzetto, I spied a shoe shop directly across the road. My radar lit up. Gorgeous shoes. I made a beeline for the place. I had to try on those blue suede boots I saw in the window. 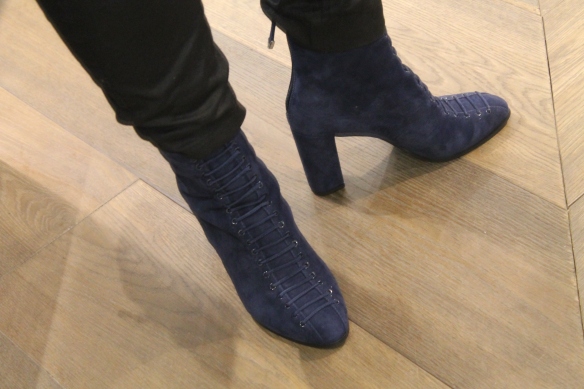 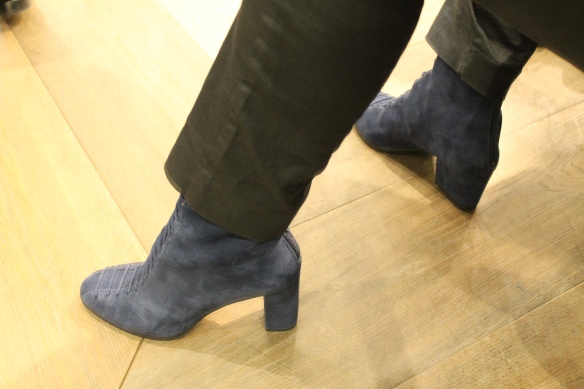 Gawgeous, no? The last time I bought a pair of boots for myself was in December 2013 when I was in Antwerp.

I’ve always loved beautiful footwear. When I was a youngster and my mother bought me new shoes, I wouldn’t wear them straight away. I’d stand them on my dresser so that I could admire them while lying in bed, just before sleep and when I woke up in the morning.

The store and the brand name is WHAT FOR (link below). They have stores all over France (many shops in Paris), in China, Japan, Thailand and Lebanon but, surprisingly, nowhere else.

I couldn’t resist taking a photo of these Wolford stockings from the new Spring-Summer Collection. Love them. They also come in knee-highs and socks.

Here are two tried and trusted favorite addresses of mine in the Marais, right near Saint Paul metro station. I’ve been going to both for over two decades.

La Tartine is an authentic, atmospheric wine bar (bistro style from the 1920s) that serves open-faced sandwiches, called a ‘tartine’, onion soup, salads and other dishes, hot and cold. The wine is good and served in different-sized carafes. I’ve read that sometimes the service isn’t great with the occasional surly waitperson, and other times it’s the opposite. Located directly on the busy rue de Rivoli at number 24.

Another cozy, authentic place that calls itself a true Parisian bistro. Located at number 12 Rue du Bourg Tibourg, 4th arrondissement. Because it’s a small place, reservations are essential (but you can always try to get in without one.) Lots of wood: wooden bar, small wooden tables, tiled floor. Excellent wine list. Click on link to see the menu in English.

I’m occasionally given free tickets to the Louvre because the company I work for is a corporate sponsor. So last night after work I hopped onto the metro and zipped down the number one line to the Palais Royal-Louvre stop. I had an invitation to attend the preview of this –

After climbing what seemed like 800 steps to get to level two of the Sully rooms (there’s one miniscule elevator in a distant corner), I did a quick tour of the collection. Aside from the many gems on view, the exhibition itself was small and appeared to be a little slapdash. I admit that after visiting the New York Met last April (a stunning, huge collection) and the Amsterdam Rijksmuseum in 2014, when it comes to displays of the 17th century Dutch masters, I am spoiled.

In a neighboring room I happily stumbled across two paintings of Venice which I thought were Canalettos, but were in fact painted by his nephew, Bernardo Bellotto. As it turns out, the Louvre curators themselves believed they were Canalettos until 2014! Here is Church of the Salute painted in 1730. It’s almost as if the painting is lit from within. Luminous! 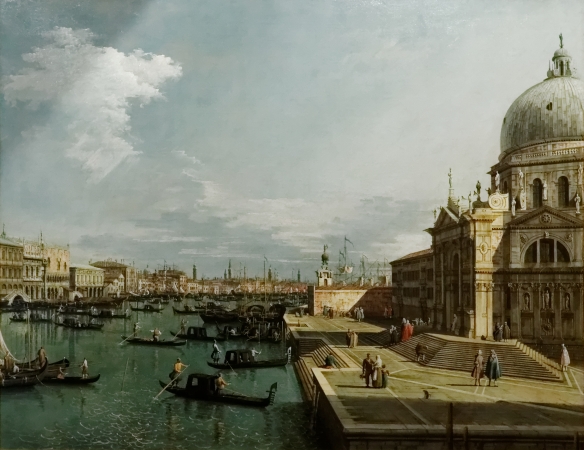 And then, again to my delight, I came across, in the same room, a favorite Monet of mine, Environs de Honfleur (Landscape around Honfleur). To stand in front of a larger-than-life favorite painting – the original – is, well, awesome. I’ve had posters and cards of this snowscape, but this is the first time I’ve actually gazed upon the original canvas. Look at those grays and blues and the abundance of snow in the foreground; the absence of direct sunlight and that heavy sky, pregnant with snow. There’s one single bird flying overhead. The tree branches (apple trees?) are loaded with snow, but what I like best is the muffled silence and restfulness that this painting evokes. Also, and surprisingly, it does not depict cold, but rather warmth.

Here’s another magnificent Monet also hanging on the wall. Claude Monet, Ice floes on the Seine at Bougival. Painted during the winter of 1867-1868, the spot is about 15 kilometres from Paris. The people are drawing water from the Seine with their buckets.

Leaving the Louvre at around 7:30 pm, famished, I jumped back on the metro and got off on the Champs-Elysées. The new FIVE GUYS opened two months ago and I wanted to check it out. For those who don’t know, FIVE GUYS is this –

American burger chain Five Guys has now debuted its largest restaurant ever in Paris. The massive restaurant arrived on the Champs-Élysées, not far from what happens to be McDonald’s most lucrative location in the world. At 1,200-square-feet spanning five floors, this Five Guys features two kitchens and a terrace.

Being an ordinary Monday night in February, there wasn’t a crowd. This was my first Five Guys experience, and I was curious. I ordered a hamburger and small fries. Twelve euros, 50 cents. 9 euros for the burger, 3.50 euros for the fries. The milkshakes are 6.50 (I didn’t order one.)

They called out my number, I took the grease-dappled paper bag that was handed to me and went outside to sit on the heated terrace. I ripped open the paper bag. Inside was a mountain of steaming hot fries. They were delicious. And the burger, or rather, double burger? It too was steaming hot and the squishy sesame bun was lovely and soft. And the meat? Succulent. A bit greasy, tasty and nicely seasoned. I’ll definitely return.

I finished eating, threw the wrappings into the garbage and walked off into the night, striding up the ‘Champs’ to catch the metro home at George V station.

The above photo, taken last night around 6:20 pm, is the view from my Swedish friend’s kitchen. Andreas lives in the 12th arrondissement of Paris, a district I like very much. We had gone to see the movie, La La Land. I was bored from beginning to end.

Andreas had booked us a table at Unico, an Argentinian restaurant on the rue Paul Bert. We walked over. I like walking on cold, clear nights.

This is what a Parisian restaurant looks like at 7:30 pm on a Saturday: empty. As a general rule, people eat late in France. But I like being the first to arrive.

Here’s the smiling manager who isn’t Argentinian, but Spanish.

We ordered beefsteaks … well, a chunk of beef, vegetables on the side, and a bottle of wine.

Followed by dessert. The restaurant slowly filled up and by the time we left it was packed.

I guess this is the reason why I don’t eat out much (although it’s lovely to go out and meet and eat with friends.)

Reading the world news has become so depressing that I find myself turning more and more to Youtube to watch documentaries, interviews and TV programs … far more interesting and enlightening. Do you know this one? It’s a British genealogy documentary program aired on the BBC. In each episode, a celebrity traces his or her family tree. The show attracted an audience of over 6 million viewers.

It was such a success, there’s an American version.

If I were to trace my own family tree, I would first go to the Baltics – to Riga, Latvia – birthplace of my maternal grandfather. Of course, it wasn’t Latvia back then but Russia. And before that, Riga was under the rule of Sweden, remaining its largest city until 1710.

As for my father’s kin, my paternal grandfather (and my father) came from north-east England (Northumberland County). Dad always claimed that he was a descendent of the Danish Vikings.

My parents ended up in Toronto and I moved to Paris. So you see, most of us come from somewhere else. And the stories along the way are interesting, to say the least.

There’s a big list of Who Do You Think You Are participants, ranging from J.K. Rowlings to Sir Ian McKellen to Twiggy to Martin Sheen and Sarah Jessica Parker You’ll find them all on Youtube.

Here’s one for starters that I found particularly interesting and entertaining. Stephen Fry, English actor, comedian and writer:

“Readers are seldom lonely or bored, because reading is a refuge and an enlightenment,” writes Paul Theroux.