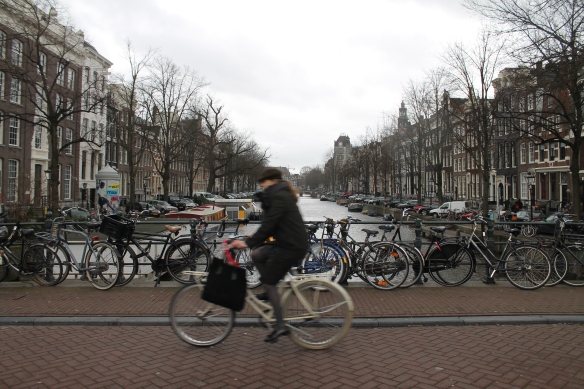 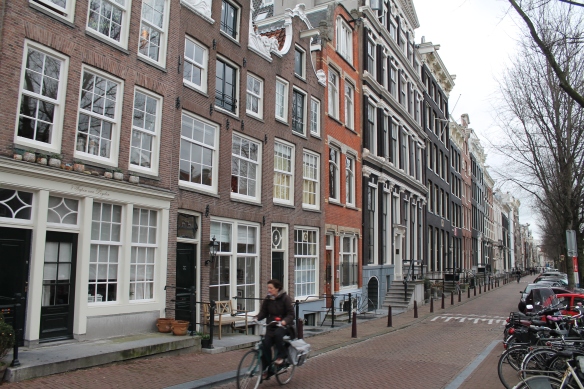 I found Amsterdam to be a romantic city with its canals, old-fashioned street lamps, picturesque shops and cozy coffee houses. Night fell swiftly at 4:30 pm and the decorative lamps cast a golden glow over the canals and cobbled streets. It’s a compact, walkable city, however a word of warning – beware when crossing the street! Squadrons of cyclists advance at a fast clip. I nearly got myself run over more than once. 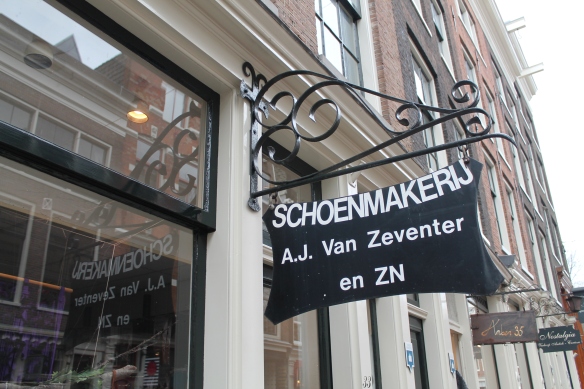 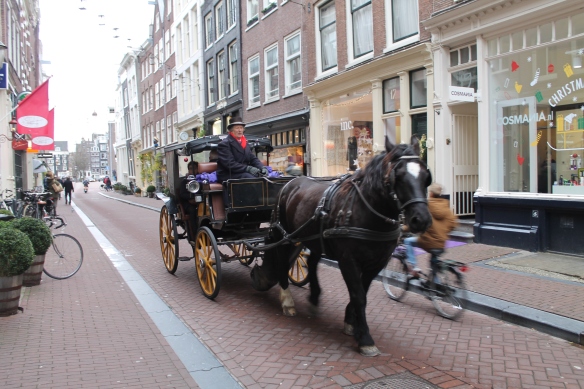 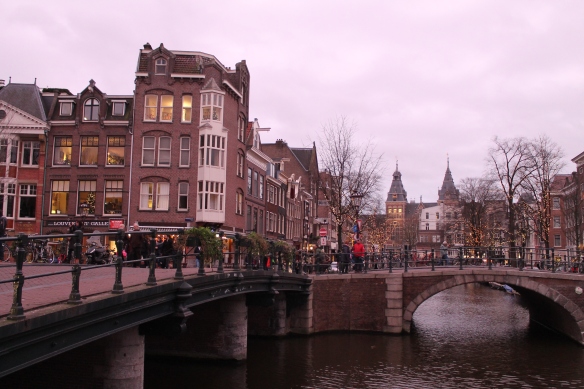 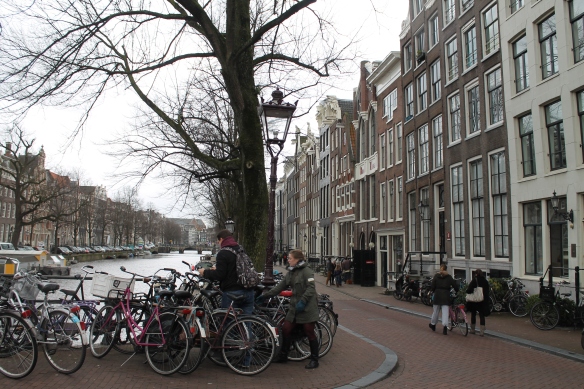 Christmas wreaths hung in windows and adorned doors. As I walked along admiring them, I thought to myself – in France, they’d be stolen overnight, along with the bicycles.

There’s a sense of virtuousness about the Dutch which I find deeply appealing. They look virtuous as they cycle energetically along (whole families sometimes, the children in a little cart attached to the bicycle or riding on the crossbar), fresh-faced and smiling, their bodies lean and fit. They also employ a no-nonsense pragmatism in their politics. A progressive city, Amsterdam has the most liberal and tolerant policies with regards to prostitution and soft drugs. Prostitution is legalized. There’s a common sense to this. By working in a controlled environment, prostitutes are protected from violence and exploitation. As for health issues, they must undergo regular medical examinations to prevent the spread of STDs. This sounds safer and saner than what one sees in Paris – male and female prostitutes lurking behind trees in the Bois de Boulogne.

As for legalized hash and marijuana, the benefits are a safer product, elimination of dealers and illicit revenue going towards criminal organizations and drug cartels. 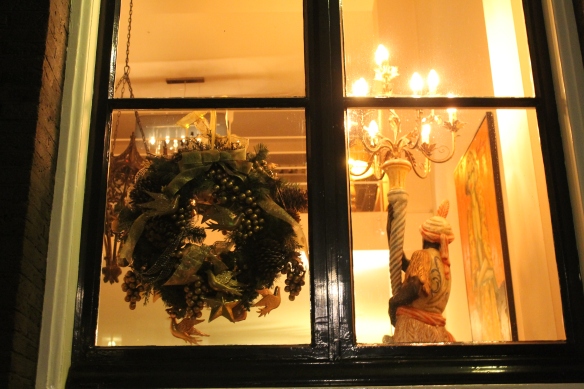 As is the custom in all northern European countries, coffee and cake (koffie en gebak) is a morning and afternoon ritual in which to enjoy almond and butter cookies, apple turnovers, gingerbread, streusel, different cakes and fruit-filled pies. Coffee shops and tea salons abound.

My hotel (link below) was perfectly located at number 15 Keizersgracht, a long road that runs parallel to a canal and winds around the city. A 10-minute walk from the train station, the hotel has soundproofed rooms equipped with comfortable beds and a deluxe espresso machine. Small shopping streets, lined on either side with boutiques, coffee shops and restaurants are just up the road. I was charmed the whole time I was there. (If you book your train tickets well in advance, you benefit from a considerable discount.)

Don’t expect sunny weather. Although fairly mild, it’s generally overcast during the winter months and even blustery as winds gust in from the North Sea. 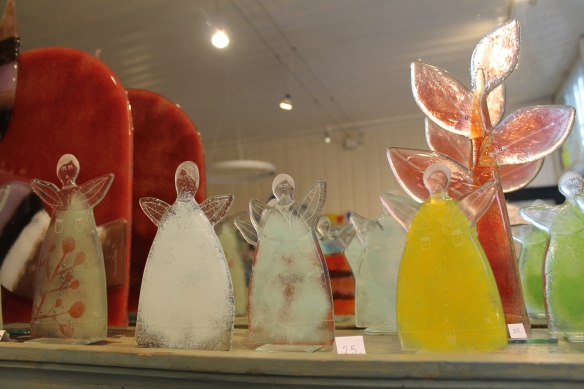 MORE TO COME – the canal houses, more photos, and the famous Rijksmuseum.

I have never seen such a huge reading list as this one. Just reading the different categories and looking at the titles takes an hour! If you fail to find a single book of interest in this vast, varied and vibrant compilation, I’d be very surprised.

A few of my favorite categories are:

TEN ESSENTIAL BOOKS THAT CAPTURE LOS ANGELES IN ALL ITS SUBLIME, BEAUTIFUL DARKNESS,

IN PRAISE OF THE LOST AND WANDERING GIRLS OF LITERATURE,

TEN WORKS OF LABYRINTHINE LITERATURE TO GET LOST IN, and

TWENTY SHORT NOVELS TO STAY UP ALL NIGHT READING.