I returned to the cemetary in search of Kandinsky’s grave (see my previous post) and, like last Saturday, I was the only person there. It was blazing hot. SO HOT that after half an hour I had to leave.  But not without taking a few more photos. In the end, I never did find Kandinsky’s final resting place.

I find this man’s optimism, as expressed through his work, supremely uplifting.

Wassily Kandinsky, who was born in Moscow in December 1866 and died in France in December 1944, was an influential Russian painter and art theorist. Credited with painting the first purely abstract works, he went on to become the master of abstract expressionism. His work is hung in museums and public art galleries worldwide. 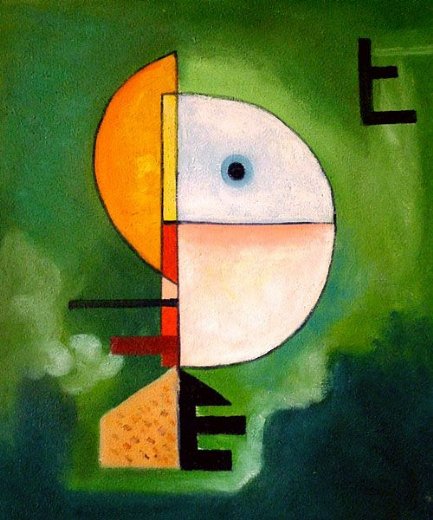 In 1896 Kandinsky settled in Munich and studied at the Academy of Fine Arts. He returned to Moscow in 1914, after the outbreak of World War I. Kandinsky was unsympathetic to the official theories on art in Communist Moscow, and returned to Germany in 1921. There, he taught at the Bauhaus school of art and architecture from 1922 until the Nazis closed it in 1933. He then moved to France where he lived for the rest of his life, becoming a French citizen in 1939 and producing some of his most prominent art. He died in 1944. 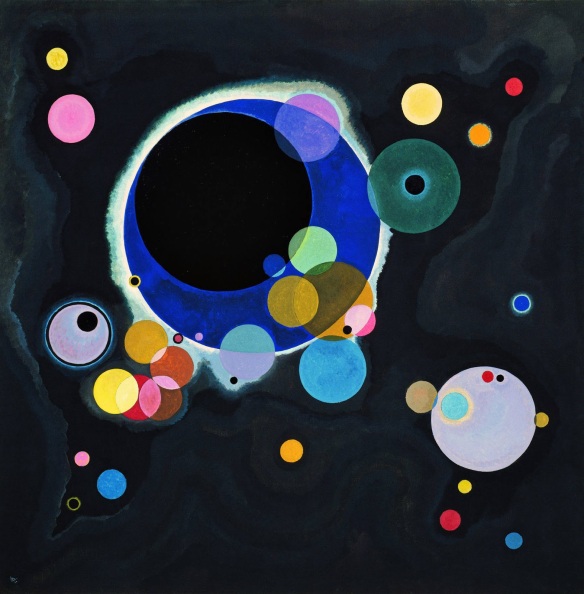 The optimism just shines through his work here, not to mention his spirit of playfulness and freedom, liberated from the traditional constraints of the past. (This painting is titled Several Circles (1926) and can be found in New York City’s Guggenheim Museum).

Below are random photos of the cemetary – these yellow flowers are ceramic. 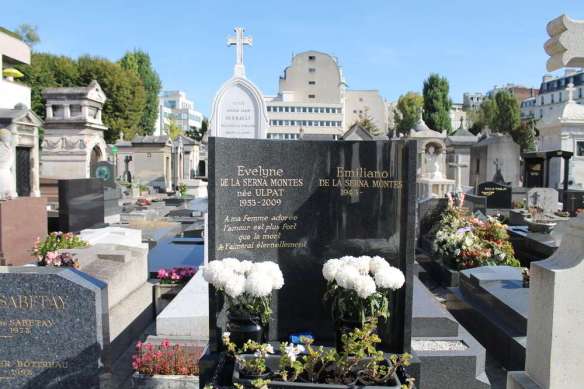 I can’t think of a more touching tribute of a husband’s love for his wife. Evelyne died at the age of 56.  Emiliano, ten years her senior, will be buried beside her when he dies. To my adored wife, love is stronger than death, I will love you for eternity.

What is CT, I wonder.  Some sort of sect or secret society?

And this is about as colourful as it gets here in autumn, at least in Paris and the outlying burbs.  I miss the dramatic autumn colours of Canada.

It’s too early for Indian Summer, but we’ve been enjoying a week-long spell of glorious sunny weather here, and today is no exception.  25°C, breezy and sunshine. This coming Tuesday is forecast to go up to 29°C.  So I trundled off to my local outdoor market this morning to stock up on fresh fruit and veg. I inquired as to the origin of these mangoes and was told Egypt and Israel. Depending on the season, they’re also imported from Peru, Brazil and the African Ivory Coast.  Delicious! 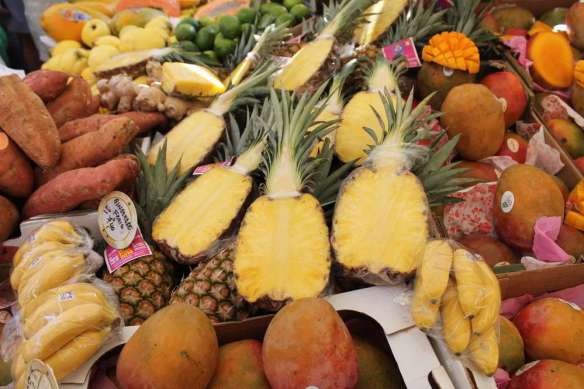 Fabulous framboises and a mountain of melons. 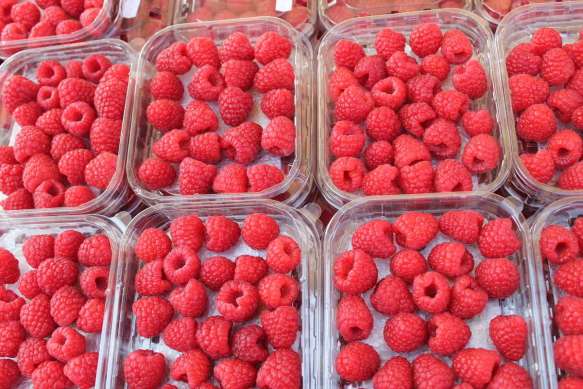 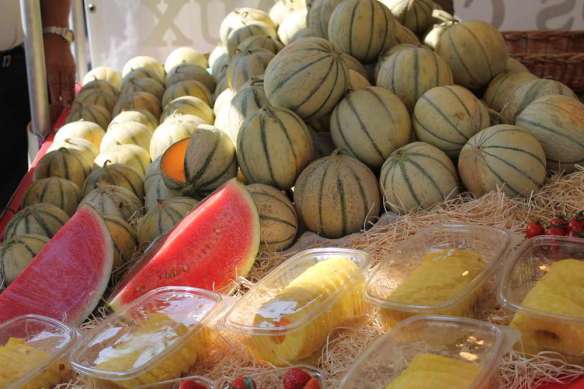 Can’t get enough of these tasty tomatoes.  Elles sont extra! 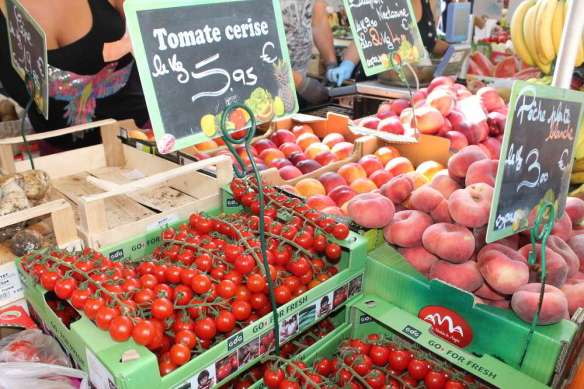 I make a simple green salad using only lettuce (fresh lettuce, not bagged) and these tomatoes.  Then I make a vinaigrette. Olive oil mixed with a little walnut oil if you have any, balsamic or any other vinegar, sea salt, good-quality French mustard and a tiny bit of honey to cut the acidity.  Done!  No-one uses bottled salad dressing in France. (Make sure that you’re whisking your vinaigrette with a fork in the bottom of the glass salad bowl, not in a separate bowl.  Grated garlic makes a nice addition.)

And look at this selection of freshly-caught fish….. 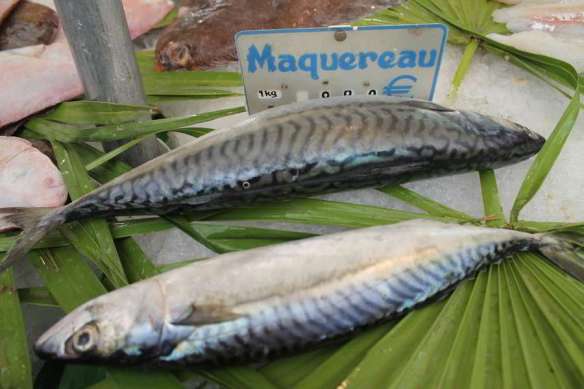 French girl in a tree. 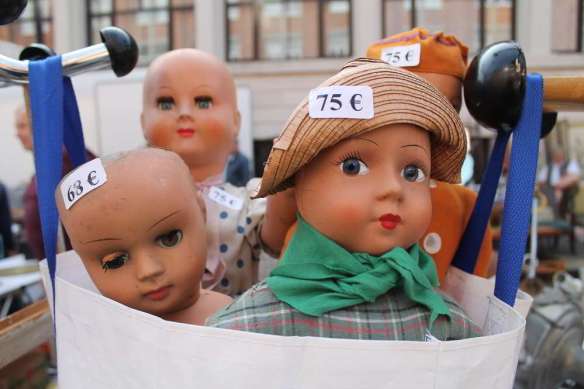 Always on the first weekend of September. The center of Lille turns into a giant pedestrian zone and nearly one million visitors come to buy, sell, barter, stroll, chat with strangers, drink beer and have a good time. Called La Grande Braderie, (braderie comes from the verb “brader” which means “to sell off”), it’s a festive tradition in this northern city.

The sky was leaden on Saturday and the atmosphere slightly subdued. But the sun came out on Sunday.

“How much for the dog?” I asked.  He was sitting on a large postcard collection. 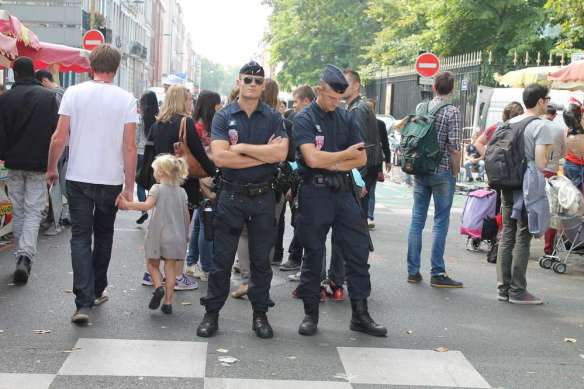 This is the only item I bought for 8 euros from a German seller. Its purpose is to drain rinsed strawberries, radishes, grapes, etc.

Here’s Martine Aubry, the Socialist mayor of Lille since 2001, much-loved by the Lillois citizens (in the middle wearing a red jacket.) 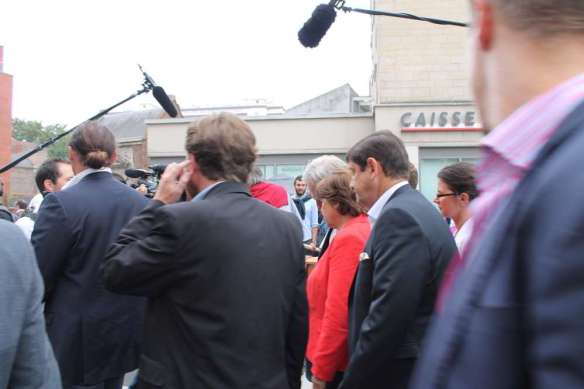 And here’s the Socialist Party booth where beer and “moules-frites” (mussels and fries) are served, a speciality of the region. Traditionally a working-class city, up until the end of the 1970s the major industries of Lille were coal, mining and textiles.

Every year the local Communist Party puts up their booth and sells their newspaper called La Lutte Ouvrière (The Workers’ Struggle).

I walked past the booth and took a photograph.

“Capitalist!” I replied with a thumbs-up sign, and walked on.