Sometimes I like a product so much that I want to tell people about it.  No, I don’t do PR for anyone, my blog is 100% independent.  Both Melvita and Esthederm are French products, so it seems appropriate here.  Last year I posted a report on another remarkable beauty product: Yves Saint Laurent’s Touche Eclat which I’ve reposted below.

Melvita was founded in 1983 by beekeeper-biologist Bernard Chevilliat on a farm in the Ardèche region of France.  Today the company is France’s largest certified organic beauty brand and has a range of over 400 products.  In 2008 the company was bought by French cosmetics brand, L’Occitane.

I love their cleansing milk for its creamy light texture and gentle fragrance. There’s a Melvita spa-boutique located in the 6th arrondissement of Paris (96 rue de Rennes) which offers facials and massages using, naturally, only Melvita products.

I’m always looking for a soothing hydrating mask because in the winter, when my skin feels parched, I’m too lazy to buy a humidifier. Last week I bought this Esthederm Intensive Hyaluronic mask which, when applied, has the most beautiful fresh fragrance and texture. You’re instructed to leave it on for only 15 to 20 minutes but, rule-breaker that I am, I leave it on all day at the weekend.  It can also be used as a night cream. 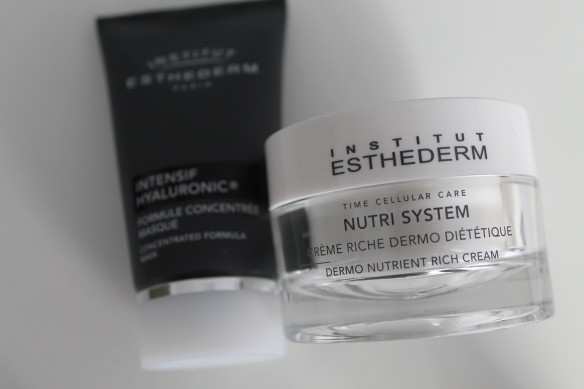 As for the Nutri System moisturizing cream, it is nutrient-rich but unfortunately doesn’t have the same fragrance as the mask.  In fact it has no fragrance.  It’s described as a High Definition Nutritional Cocktail: 8 vitamins, 5 minerals and trace elements, omega 3 and 6 fatty acids.

I’ve been using the Esthederm line for years; they’ve recently changed their packaging and introduced a whole bunch of new products.  Note: their suncare products are exceptional.  Someone (a top model) refers to them as the Rolls Royce of suncare – advanced, hi-tech formulas that minimise the harmful effects of UV radiation whilst grabbing hold of the positive effects.  And it’s true.  They’re expensive but worth it.  In June I’m going to a sun-soaked destination and will be stocking up. (the sun-soaked destination is Puglia, Italy.  Return to Home page, click on Destinations up top and see my blog posts on this lovely destination located in the heel of Italy.)

Here’s a marvellous discovery I made while wandering the aisles and perfume counters of Au Printemps department store on the boulevard Haussmann in central Paris. Accosted by a ravishing sales rep promoting Yves Saint Laurent products, I was asked if I’d like to try the new Touche Éclat – they were offering a 20% discount.  I said “sure.” Or rather, “bien sûr !”

I wasn’t really in the market for foundation because I was quite happy with my Diorskin Nude.  However, after the sales rep had finished with my face, I walked away with a new bottle of Touche Éclat creamy foundation at 44 euros ($59CAD/$58US/£37GPB) minus the discount and I haven’t touched the Diorskin since. It appears that a lot of women worldwide – and some men, too – are raving about this product. Yes, it’s more expensive than other foundations, but I’d say it’s worth the investment.

So what makes this French product stand out from the crowd?  Firstly, it goes without saying that Yves Saint Laurent is a valued and luxurious cosmetic brand. Secondly, as you apply the foundation to your skin you notice it has a lovely delicate scent which is a pleasant thing to acknowledge as you stand bleary-eyed in front of the bathroom mirror early in the morning. Thirdly, it blends easily into the skin with an almost-moisturizing texture because it’s gel and not water-based like other foundations. Fourthly, it has a super-lightweight consistency (what YSL calls “weightless”) which is great for summer and it has a built-in sunscreen of SPF 20.

Oh, and did I mention it comes in 22 different shades segmented into three complexion groups of pinks, yellows and beiges?

This is an illuminating foundation which means it’s light reflective, hence the name éclat which means Radiant. Bright. Luminosity.

What’s really special about this product, as if the above features aren’t enough, is that it’s a long-awaited follow-up to – and has the same properties of – the iconic Touche éclat stick which came out in the 1980s and caused a sensation among makeup artists and models.  A lot of people, however, don’t know how to properly use this stick.  I’ve had several over the decades and was initially baffled by it.  The stick is called a complexion highlighter and claims to illuminate your skin and make dark circles, lines and signs of fatigue disappear with a few strategic strokes.  It is also light reflective.  All this interested me because I’ve had dark circles under my eyes since I was 6; as a result, I think I’ve tried every concealer and highlighter on the market.

Here’s a video of a French makeup artist (looking quite pleased with himself) using the two above products on a model who looks like she’s walked straight out of The Stepford Wives. Only a Frenchman would say “long strokes that caress the skin”, and I’m guessing that the YSL brush he’s using costs more than the foundation itself (why are those brushes so expensive?)

But the video serves as a tutorial on how to correctly apply skin foundation, as well as that Touche Eclat stick.  I found it informative and maybe you will too.  Applying foundation to your face with a quality brush seems like a good idea.  One last thing – at the beginning of the video he explains how to select the right shade for your skin.  You shouldn’t be doing this (because we always get it wrong.)  YSL sales reps are trained to select the right shade for you.