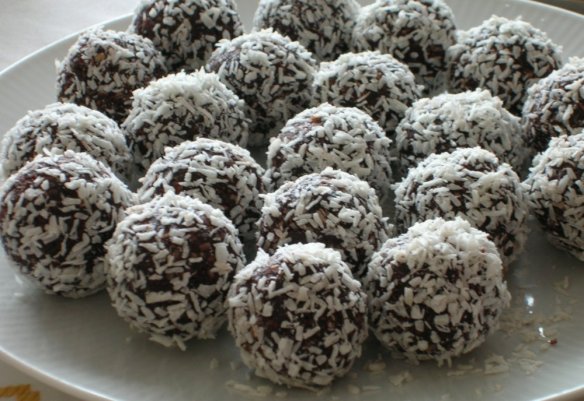 My Swedish friend….or rather, my slim Swedish friend….has been following the Paleo diet for a few years now.  He says it’s more than a diet, it’s a lifestyle.  Below is his recipe for coconut balls.  They are raw, delicious and packed with protein and good fats.

Clueless as to what Paleo was, I did some googling and came up with this –

the Paleolithic diet – what our hunter/gatherer ancestors ate.

In other words, the caveman diet.  Everything you can hunt, fish, grow or pick.  (Somehow, though, I can’t imagine our Paleo ancestors making coconut balls.)

What the Paleo regime doesn’t include is refined carbs as in flour, sugar, bread, pasta, rice and other white foods which have no nutritional value whatsoever.  Anything made from white flour is banished (high carb, high calorie, high glycemic index, highly processed).  Bye-bye crusty baguette, pain au chocolat, linguine, pizza, breakfast cereals and a dozen other things that, frankly, I don’t miss at all.  Last week a work colleague brought me a baguette sandwich for lunch.  I opened it up, ate the chicken, tomato and lettuce inside and didn’t eat the bread.  I’m totally off white bread and pasta.

Pancakes on the weekend?  Take one ripe banana, mash it up with one or two eggs in a bowl, add a small amount of almond milk and coconut flour, cook in a skillet and they’re more delicious than regular pancakes.  Serve with fresh fruit and drizzle with organic honey or maple syrup.

My resolution for 2015 is to lose 8 kilos (17.6 pounds), so in January I enthusiastically embarked on the Paleo diet.  In the first week I lost one and a half kilos (3.3 pounds).  Two months later I can say that I have loads more energy, clearer skin, clearer eyes, a flatter stomach and my lower back pain has diminished.  It’s like all that white food was dragging me down, bloating me, and holding back my energy potential.

Back to the coconut balls, which were a big hit at the office by the way.  Did I mention they’re great with coffee?  Recipe below as well as some Paleo links. 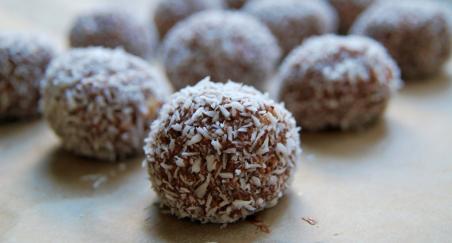 Mix dates and nuts in a food processor.

Add the other ingredients and mix to a smooth dough.

Form balls then roll them in (additional) shredded coconut.  Chill in fridge or freezer until ready to serve.