It was cool and rainy when I left the office two nights ago at 6 p.m. But instead of scurrying home, I jumped on the metro and headed to the Louvre museum. The Louvre is closed on Tuesdays. So why was I going?

The company I work for is a patron of the Louvre, so I was given a ticket to attend a private viewing of the Abu Dhabi exhibition before it opens to the public on May 2nd. 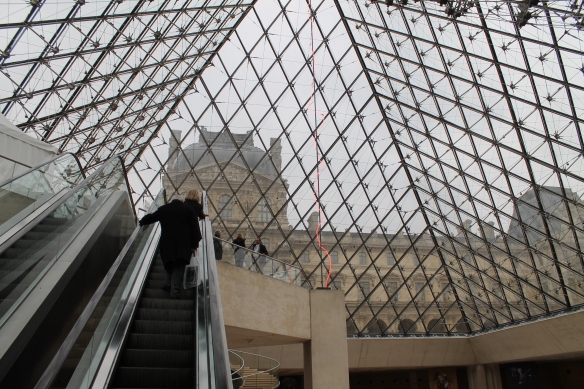 So what exactly is the Louvre Abu Dhabi located in the United Arab Emirates (UAE), one of the oil-rich states that juts into the Persian Gulf?

Back in the 1990s, a lucrative deal was brokered between the French government and Sheik Sultan bin Tahnoon Al Nahyan, chairman of the Abu Dhabi Tourism and Culture Authority.

A museum would be built on Saadiyat Island in Abu Dhabi and will be part of an ambitious billion-dollar tourist and cultural complex.  Two other museums are planned: a branch of New York’s Guggenheim and a national museum.

Artwork from around the world will be showcased, with particular focus on bridging the gap between Eastern and Western art.

US$525 million was paid by Abu Dhabi to be associated with the Louvre name, and an additional $747 million in exchange for art loans, special exhibitions and management advice.

The architect of the Louvre Abu Dhabi is the well-known Frenchman, Jean Nouvel, and the museum is scheduled to open its doors in December 2015.  Here’s what it will look like –

The Paris exhibition featured 160 works acquired by Abu Dhabi for their permanent collection.  I’m afraid I was unable to take photographs of the actual treasures on display, but I saw some marvels that included a silver dish from the Tang Dynasty (618–907 AD), a bronze dancing Shiva from southern India (10th century), copper trays inlaid with silver and gold from northern Iraq (13th century), a mother of pearl jug studded with turquoise and garnets from India (early 16th century) and an astrolabe from 13th century Afghanistan, used to predict the positions of the stars. Further along was the modern collection comprising paintings by Manet, Mondrian, Magritte and Picasso, but I was far more bedazzled by the antiques.

We were a small group and it was nice not to be jostled by a large crowd.  As I stood and gazed at Giovanni Bellini’s 15th century painting of Madonna and Child whose sumptuous colours appeared as fresh and recent as if it had been painted only decades ago, I was joined by another woman.  In silence, we marvelled at the luminous splendour of this Venetian Renaissance masterpiece.  As I turned to move on, I looked over and saw that the woman standing beside me was Claudia Cardinale.

I highly recommend the Café Marly restaurant that overlooks the courtyard and I.M. Pei’s glass pyramid.  After touring the Louvre, you can have lunch, dinner or an afternoon snack here. Here’s a post I wrote in June 2013 about it –