One of my favorite places to rendezvous is at the fountain in the Jardin du Palais Royal. I’ve been enjoying the graceful splendor of this garden for decades.

There are restaurants and elegant shops under the arcades. Or you can just sit on a bench or chair and enjoy the sound of birdsong and the splashing fountain. 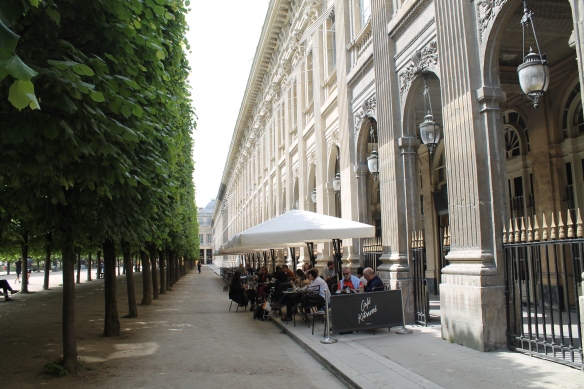 The garden is a perfect starting point for shopping and lunch. My friend, Monique, and I rendezvoused at the fountain at noon. (We met while working in the same American law firm in year 2000, and have been friends ever since. Back then, we were bilingual legal secretaries. Today, she runs her own B&B business and I work as a paralegal-translator in the legal department of an investment bank.) We headed north to the Galerie Vivienne, built in 1826. See this splendid mosaic tiled floor? It’s the original floor created by Giandomenico Facchina, an Italian mosaic artist who did much of his work in France.

It was lunch hour, but we got waylaid by some linen clothes in a boutique called Manuelle Guibal. We chatted awhile with the woman who worked there. She gave me the name of a boutique in Lisbon where I can find the same clothes. (I’m going there in June.) See my Portugal travel posts. 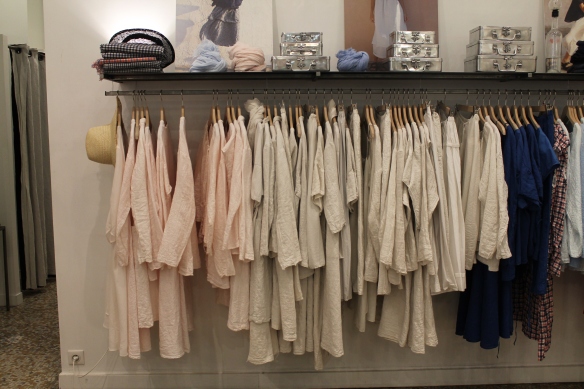 We then headed towards the Place des Victoires where I wanted to visit the English boutique that I visit and rave over in London, The Designers Guild. This one had just opened. It was a lot smaller and, I’m sorry to say, the customer service didn’t hold a candle to the service you’d get in London. 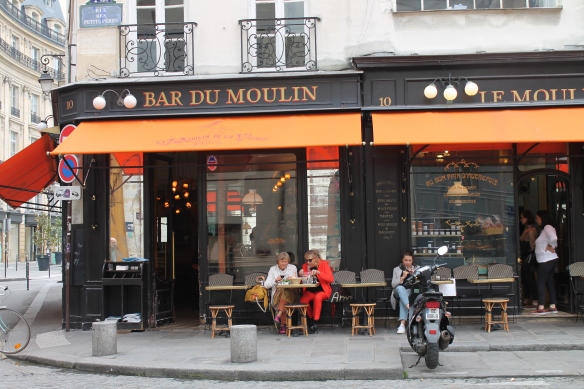 Directly across the road was this restaurant where we sat at an outdoor table. I ordered a tomato mozzarella salad and a tiny glass of wine, Monique ordered a sort of grilled chicken niçoise salad.

When you think that you can buy a decent bottle of French wine for 6 euros and you’re charged 6 euros for a tiny glass, it’s a little bit scandalous. But this is the price you pay for the privilege of eating in a chic Parisian neighborhood. 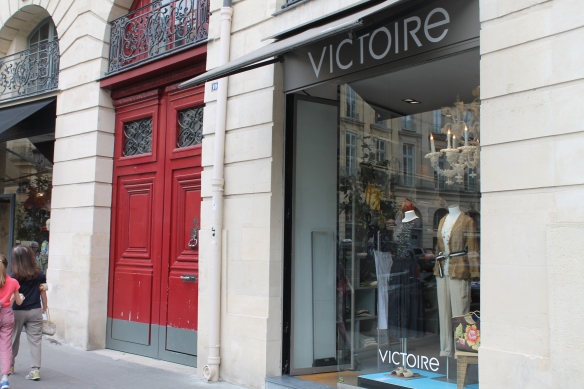 Speaking of chic, directly around the corner and located on the Place des Victoires is this gorgeous little boutique where I’ve been shopping for decades.

Upon entering, we spied a bunch of gorgeous scarves. Italian made, some were silk, some were a blend of silk and modal. A type of rayon, modal is a bio-based textile made from the beechwood tree. Modal fabric feels silky-soft on the skin yet is hard-wearing and colorfast when dyed.

A woman can never have enough scarves, is my opinion. Again, we spent a long while talking to the friendly saleswoman and trying on scarves. 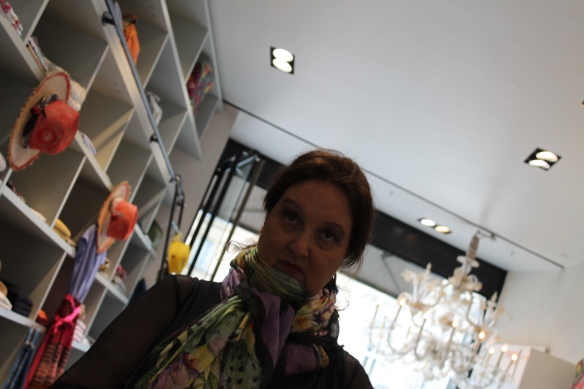 I ended up taking these last two photos of myself in the mirror because no-one could figure out how to work my camera. Sigh. I always end up doing everything myself. The scarf I ended up buying – half silk, half modal – is a gorgeous swirl of mauves, greens, pinks and yellows. It’s lightweight, soft and warm and you can scrunch it up (great for travelling.)

Our last stop was Dehillerin, the kitchenware store located off the rue du Louvre. I was in search of a strainer, called une passoire in French. 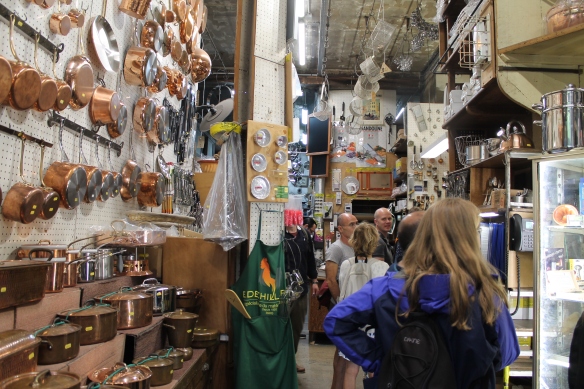 This shop used to be, and still is, a wholesaler for restaurants. Before tourists discovered it, it was a sleepy dusty place. Now it’s super-popular and has a new lease on life. 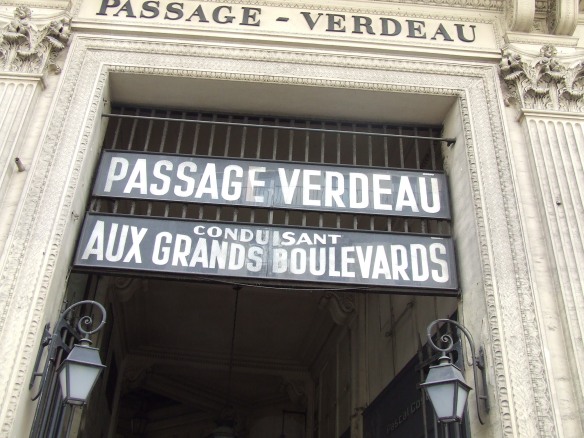 When I first moved to this city, I lived in the 9th arrondissement and worked in the Paris bureau of the Reuters news agency. Imagine my delight when I discovered that the hidden passage located near my apartment snaked through the city and led directly to my place of work. Fresh from North America, I was utterly charmed by the historical aspect of these late 18th-century and mid 19th-century conduits. I imagined myself in an Emile Zola novel. In fact, Zola wrote about the passages in his novel, Nana. Here’s a brief excerpt (published in 1880!)

“One December evening Count Muffat was strolling in the Passage des Panoramas. The evening was very mild, and owing to a passing shower, the passage had become crowded with people. There was a perfect mob of them, and they thronged slowly and laboriously between the shops on either side. A perfect stream of brilliancy emanated from white globes, red lanterns, blue transparencies, lines of gas jets, gigantic watches and fans, outlined in flame and burning in the open. And the displays in the shops, the gold ornaments of the jeweler’s, the glass ornaments of the confectioner’s, the light-colored silks of the modiste’s, seemed to shine in the crude light of the reflectors behind the plate-glass windows.”

Each passage has its own character; some a bit shabby and run-down, others well-tended. Here’s the Passage Verdeau, near rue Cadet in the 9th arrondissement, that was my starting point when I walked to work all those years ago.

There used to be a restaurant-deli in the Passage Verdeau called Le Stube which sold divine German pastries (strudels, poppyseed cake, Sachertorte, etc.), pastrami and Black Forest ham sandwiches on rye, hot dishes of sauerkraut, bratwurst, etc. I once had a delicious potato and herring salad followed by warm cherry strudel and a double espresso there. They used to sell those irresistible Niederegger marzipan chocolate-covered loaves that I love. Sadly, Le Stube is no longer there.

Here’s the next connecting passage. It’s Sunday, so this bookseller’s shop is closed. For several years, twice a day, I walked this route, dawdling in the shops on the way home, never tiring of its appeal. 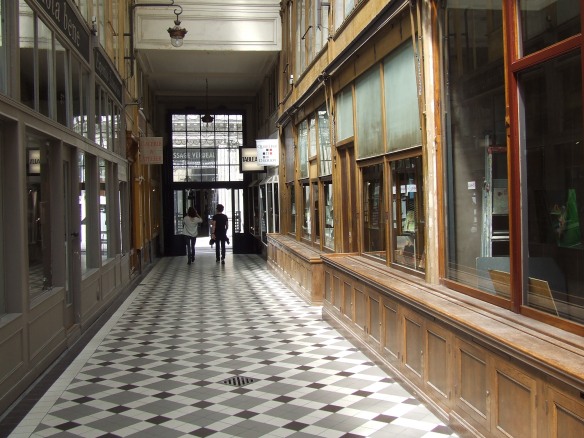 Exit the Passage Jouffroy, cross the boulevard Montmartre, and into the next stretch of passage. For anyone wanting to come here, the nearest metro station is Grands Boulevards.

Further south, on the other side of the Bourse (the stock exchange) is another, independent passage called the Galerie Vivienne. This is the most elegant and well-tended of the glass-roofed shopping arcades. At Christmas-time it’s all lit up with fairy lights. Notice the gorgeous mosaic tiled flooring.

This is a great shopping area. Inside this passage and outside on the rue des Petits Champs heading towards the Place des Victoires are dozens of small clothing boutiques. There’s a shop inside the Galerie Vivienne called Nathalie Garçon which sells original one-off pieces. Directly across from it is another shop that sells exquisite scarves.

Further up is a second-hand clothing shop called La Marelle where I’ve bought and sold many shoes, handbags, clothes and accessories over the years. You can pick up a gorgeous pair of Prada shoes, a Fendi handbag or items of clothing with Miu Miu, Hermès, YSL labels and other luxury brand names, depending on what’s in stock.

This lovely-looking restaurant (below) is overpriced and a bit precious. 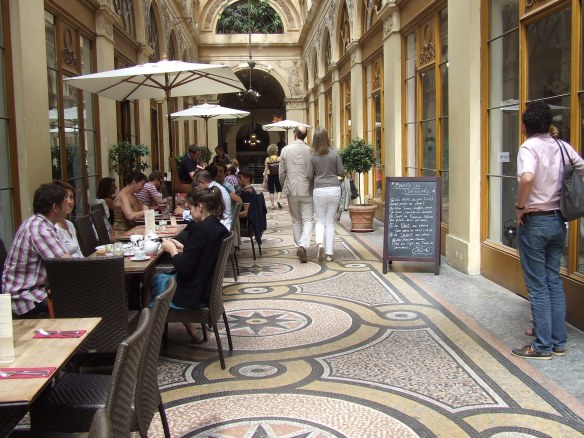 Instead, I recommend the Bistrot Vivienne at number 4 rue des Petits-Champs, just at the entrance of the Galerie Vivienne. It’s much more down to earth and serves delicious, hearty meals and good carafes of wine. Remember the movie, Something’s Gotta Give, with Jack Nicholson and Diane Keaton? The Parisian brasserie where they and Keanu Reeves ate at is Le Grand Colbert, located just around the corner at number 2 rue Vivienne.

If you’re a wine lover, you must visit LEGRAND wine merchants. From their website: A wine cellar, gourmet grocery store, a bistro, a tasting bar — visit Legrand’s many ideal spaces in which to share our passion for wine. You can have a meal there, drink a fabulous glass or bottle of wine, and buy some sweets afterward (and a few bottles of wine, bien sûr!)

Before you click on this in-depth link below of these shops, I just wanted to add that there’s a lesser known passage, very chic, that I haven’t been to yet, but intend to explore. It’s tucked away in a backstreet near the Louvre, and it’s called the Galerie Véro-Dodat. It’s a hidden gem, I hear, with a good French restaurant inside called the Restaurant Véro Dodat. (P.S. There’s a Christian Louboutin boutique inside this gallery, so it must be très chic indeed.)

Come with me and discover some of the fashion, food and shopping hotspots in Paris: some well-known, others less so; some central, others off-the-grid. These are places that I (and other Parisians) visit regularly.

Our first destination is the Place des Victoires, territory of the fashionista and far from the crush of the 8th arrondissement. Compared with the oh-so-crowded Marais district, Saint-Germain-des-Prés and the big department stores on the boulevard Haussmann, this understated yet fashionable neighbourhood is far more spacious and quieter on Saturday afternoons. Wedged between the opera house, the Grands boulevards and the Palais Royal, with the Stock Exchange smack dab in the middle, the 2nd arrondissement is perfectly positioned in the central core of the city.

The best way to get to the circular Place des Victoires is to take the metro to Palais-Royal then walk through the Palais Royal gardens. When you come out of the gardens at the north end, turn right onto the rue des Petits Champs. As you walk along the narrow sidewalk, you’ll see the elegant 19th-century shopping arcade, the Galerie Vivienne on your left. Why not have lunch at the reasonably-priced Bistrot Vivienne? Or, even better and if the weather is nice, stop for lunch in the actual garden of the Palais Royal where there are a few reasonably-priced restaurants under the arcades. The Palais Royal garden is my most favourite spot in Paris. So much so that I have dedicated a blog post to it (the link, entitled Secret Garden, is at the bottom of this post).

Here’s the inside of the gallery which, in essence, is an early 19th century shopping mall. 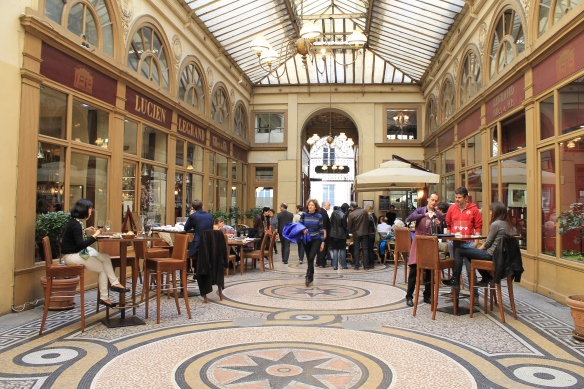 A note for wine buffs: don’t miss Legrand wine merchants (photo below), a delicious Paris institution. When I’m feeling flush, I come here to buy a bottle of plummy Chinon. Legrand has selections not only from prestigious vineyards, but from small and independent vineyards as well.

Make your way to the front to the original shop and you’ll find chocolates, gourmet food items and old-fashioned candies on sale. Ask for négus which are stored in a big glass jar; these are my favourite (crackly on the outside, soft caramel inside). Still made in the Burgundy town of Nevers, négus are dark brown bonbons created in 1900 in honour of the official visit of Menelik II, the Emperor of Abyssinia (now called Ethiopia). Imagine that!  Everything has a story.

Walk further along and on your left you’ll come to a second-hand designer clothes shop called La Marelle. Depending on their stock at the moment, you can pick up some real gems. As well as designer clothes, they also sell handbags, shoes, belts and some jewelry.

I fell in love with these shoes but they were a size too small!

People seemed to be enjoying this café, so I went in for a fuel stop. I stood at the bar and ordered an espresso.

It was awful.  And it cost me 1 euro 40.  Here’s the barman making it for me.  I should have said to him – Monsieur, votre café est dégueulasse! – but on that particular day I was feeling mellow and let it pass.  The majority of Parisian cafés serve pretty foul coffee which explains the coffee revolution that took place a few years ago.  Today there are a number of quality coffee bars dotted around the city, most of them run by Australians and Americans.