I don’t know who chose the Paris Aquarium for our annual Christmas party venue, but we went last night and sort of had a good time. The best part was the location: at Trocadero right near La Grande Dame de Paris, otherwise known as the Eiffel Tower.

Inside the venue, there were long corridors lined on either side with fish-filled aquariums, beautifully-colored tropical fish.

The jellyfish, called méduse in French, were the most impressive.

I wandered around looking at the different species, then stood alone in front of a fish and shark tank and took a selfie.

Then I stood alone at the bar and had a glass of champagne. It should be known that the French, especially Parisians, are never on time. In fact, it is considered rude to show up at the designated time. As for me, the invitation said 7:30 pm, and I was there at 7:30 pm. 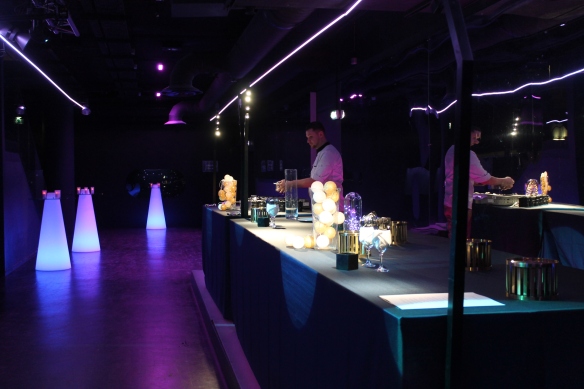 Then I went to look at the fish again before people started arriving at 8 pm.

For fun, there was a photographer who took pictures of some of my colleagues. There’s a wonderful diversity and international flavor in my workplace.

The rest of these photos I took myself.

As I stood at the bar with my colleagues eating – guess what? – raw fish sashimi and sushi, I thought fondly of the memorable Christmas outing we had two years ago of the Paris opera house. Here’s the link here:

5 thoughts on “annual Christmas party at the Paris aquarium”