It was a cold, clear night when I left my place at 8 pm and jumped on the metro. To my surprise, the train speeded across town in record time. Why? For reasons of crowd control, they had closed six stations along the Champs-Elysées starting from Argentine all the way to Tuileries. As the driverless, automated train sailed straight through the closed stations, gathered speed and hurtled across the city, the car I was in lurched alarmingly from side to side. I felt like I was in that Sandra Bullock runaway bus movie.

Here’s the restaurant where I spent December 31st with my friend and his mother. Yes, it’s Paul Bert again, but this time its the sister restaurant up the road called 6 Paul Bert. 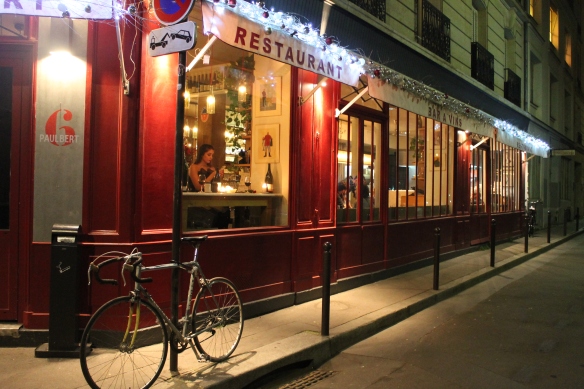 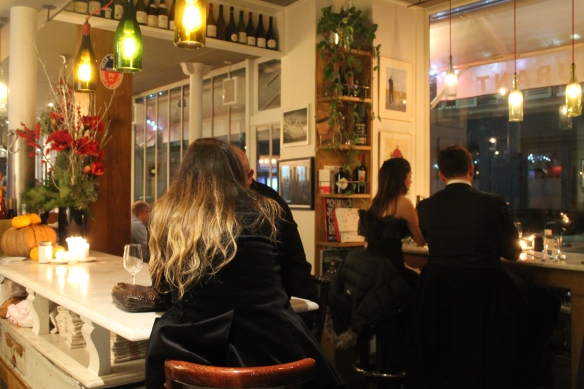 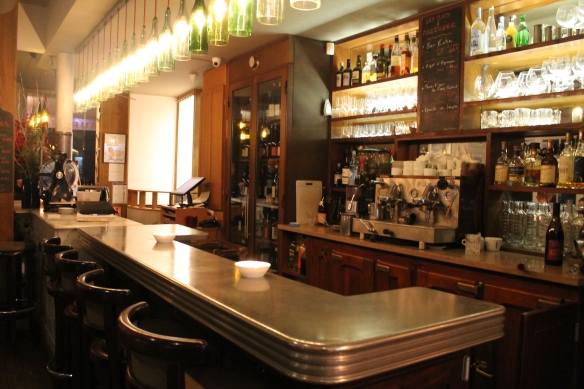 This place is warm, welcoming and spotlessly clean. A few years ago, I spent December 31st sitting at this bar with a fellow Canadian blogger. In France, most restaurants serve a prix fixe menu on December 31st. This one, without wine, was 80 euros. 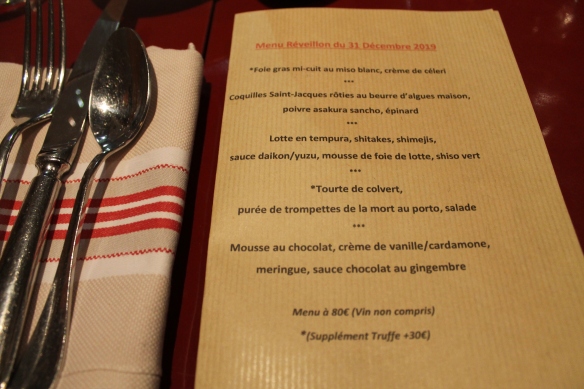 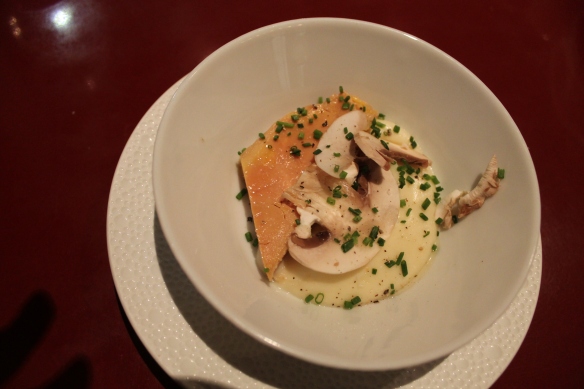 The first small dish was underwhelming. The foie gras was cold and the celery purée warm. What followed was, in my opinion, the best dish of all: plump scallops in a garlic buttery herby sauce. Delicious! 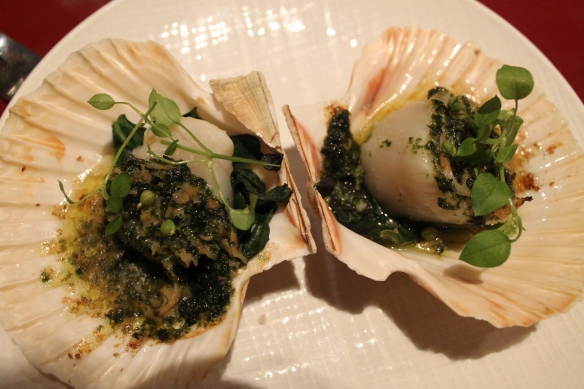 Then came the fish dish which was a crispy lotte (monkfish) tempura served with shiitake mushrooms in an interesting sauce. 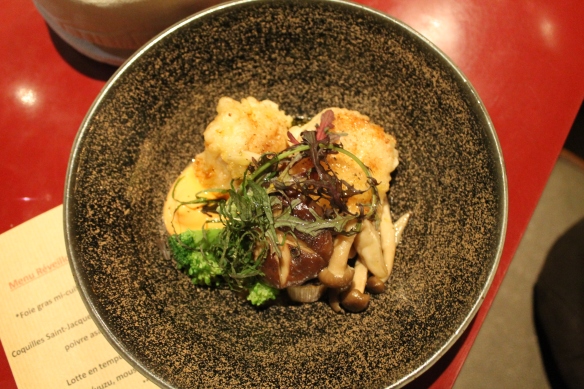 This was the main dish, a sort of beef wellington idea, except that it was duck instead of beef. Assembled with liver pate then wrapped in puff pastry and served with a porto-based sauce, it was very good but a bit on the rich side. 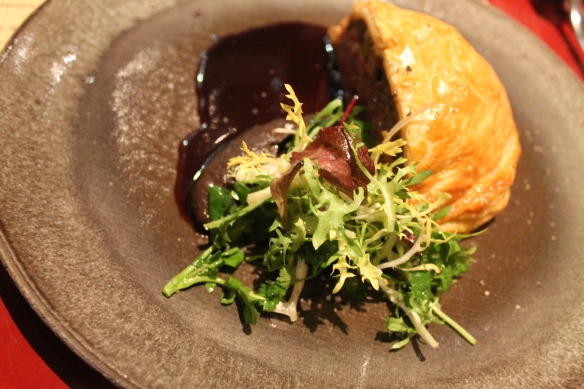 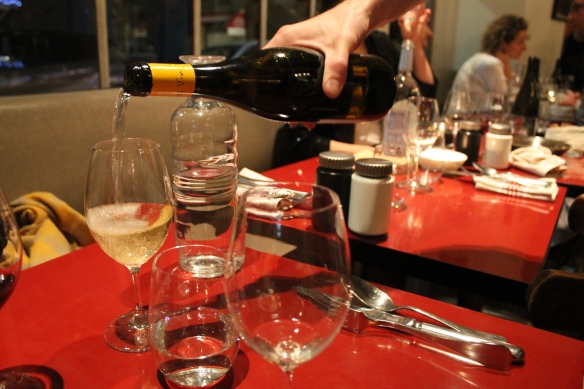 The dessert was a huge disappointment. When you think of all the marvellous concoctions in the dessert repertoire that could have been offered, this was totally banal (and tasteless.) A cheese tray to follow would have been nice. 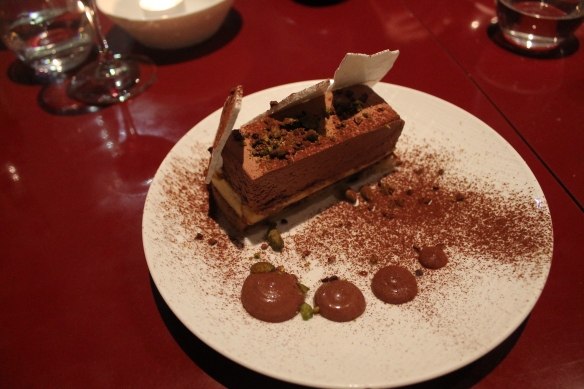 As for the wine, we chose a Minervois from the Languedoc region. It was nicely structured and had a lovely bouquet and color, but was too young and light-bodied, I’m afraid. When I celebrated New Year’s Eve in this same place a few years ago, we drank a stellar Saint-Joseph 2012 from the Côtes-du-Rhône region. 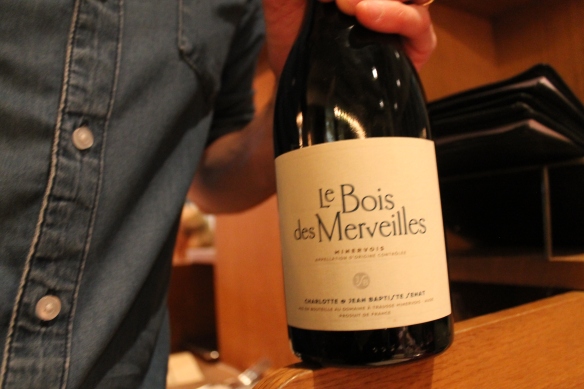 No one was aware that midnight had arrived until the two groups to the left of us leapt up and cried “Bonne Année!! Bonne Année!!“ 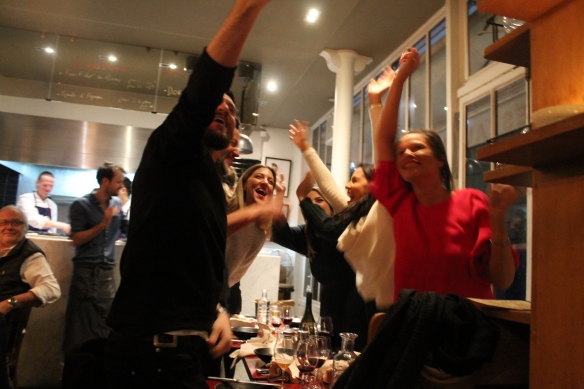 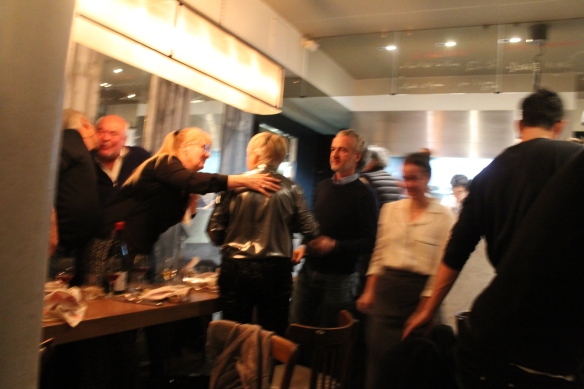 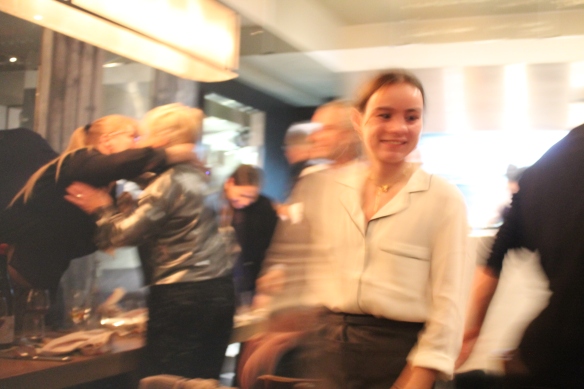 Edouard, the charming manager, walked through the small restaurant and shook hands with every patron. It was fun. Here’s Edouard here standing in the middle in the blue shirt. 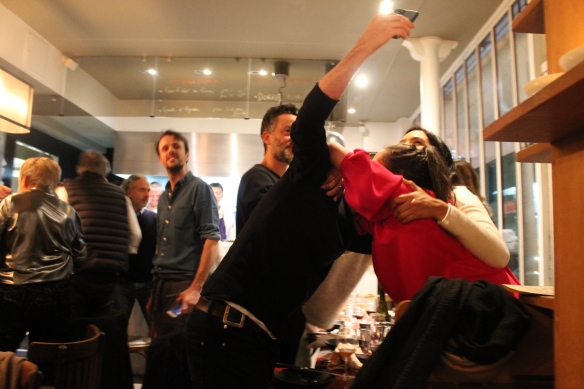 It was also nice to see goodwill and a burst of happiness after all the stress and inconvenience we Parisians have endured due to the transportation strikes. 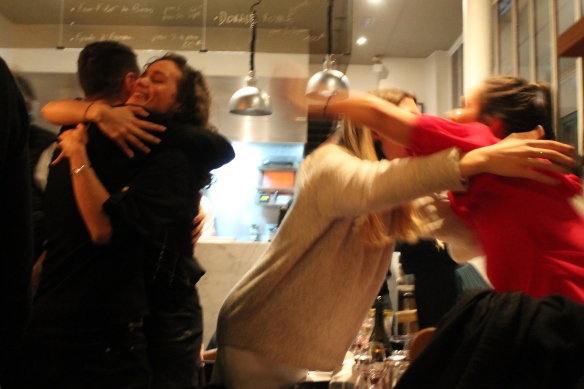 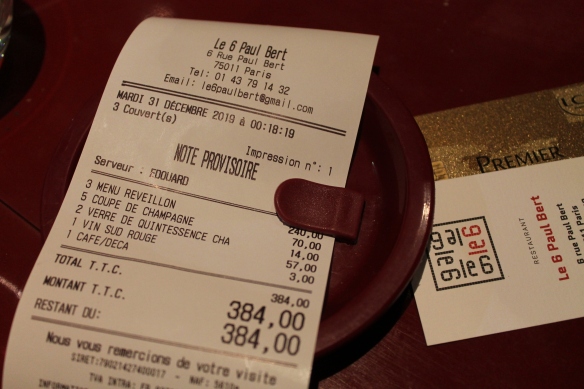 Leaving the restaurant at around 12:30 am, it was freezing cold and damp outside. We walked briskly to the metro station then separated. I jumped on the number one line which was surprisingly quiet. A half hour earlier there had been 300,000 revellers on the Champs-Elysées watching the fireworks. Where did they all go? The train sped cross-town and within twenty minutes I was at my station. I headed to the escalator, it was still shut down. Thanks, union strikers!  At 1 am I trudged up 45 steps, then walked home and went to bed.