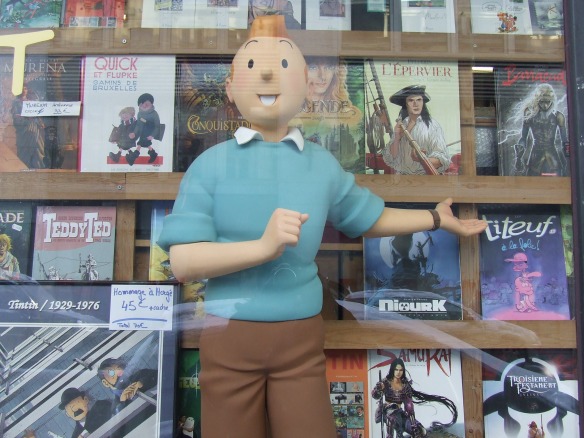 The next day was warmer: minus five instead of minus eight. But the sun had disappeared behind thick cloud and the resulting gloom did not compel me to rush outdoors. So I lingered over a second cappuccino in the breakfast room while listening to classical music and and poring over the stash of design books, maps, and travel brochures made available to guests. Sofie and another woman came in and we chatted about the flea market and antique stalls in the nearby Marolles district.

The above photograph, for those who don’t recognize Tintin, was taken in the window of a comic book shop. Comic books are big in Belgium. The Adventures of Tintin sells more than a million copies a year worldwide and is translated into more than 50 languages. Tintin is a Belgian reporter aided in his adventures by faithful dog Snowy (called Milou in the French edition.) Every year Brussels hosts a Comic Book Festival where enormous balloon characters parade down the main streets.

On my last day in this lovely city I decided to wander further afield and visit the new Magritte museum and the adjoining Musée des Beaux Arts. There was also a lamp I wanted to buy. I spotted it, late yesterday afternoon, in the window of an interior design shop. It spoke to me. I’m a bit of a lamp fetishist, I’m afraid. I don’t really need another lamp, but this one, in the form of a shell, will be perfect on my credenza. 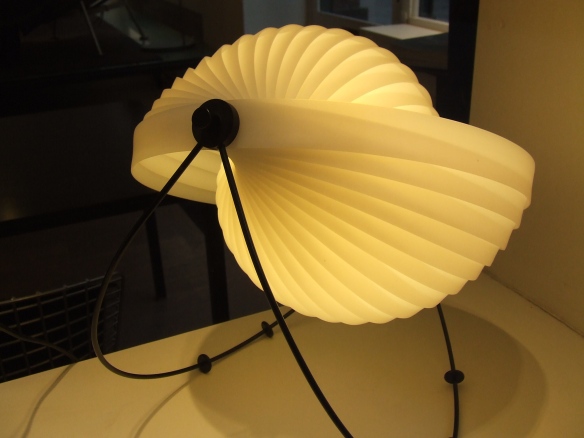 Heading outside, I walked the 15 minutes in a straight line to the Grand Place and veered right towards the Place Albertine. Trudging through snow and over the still ice-encrusted sidewalks (it appears that the city’s snow removal services don’t do sidewalks), I eventually reached this park: a pristine, public park designed in a neoclassicist, geometric style.  As if frozen in time, its petrified sculptures lay under a mantle of snow: 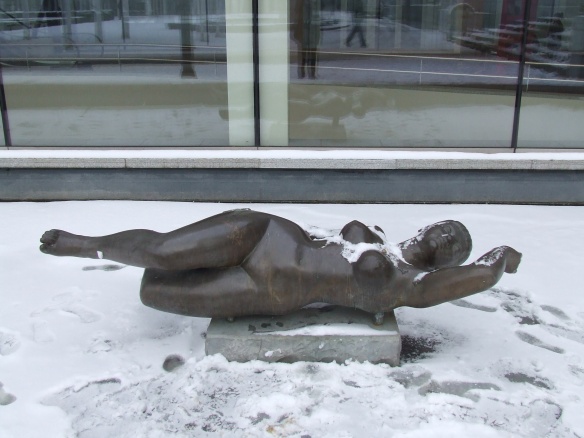 It was a pleasant experience walking through that silent, unpeopled park, the distant sounds of the city muffled by the snow. I finally reached the Magritte museum and spent the next hour wandering contentedly through its galleries, looking at and learning about the work of this Belgian surrealist artist (1898-1967):

“Rene Magritte’s work has both philosophical and poetic content which corresponds to certain social and intellectual trends, particularly of the second half of the twentieth century. His work was not easy to approach at the outset, however, and makes a constant call on us to relinquish, at least temporarily, our usual expectations of art.  Magritte never responds to our demands and expectations. He offers us something else instead.”

And then, sadly, it was time to return to Paris. I reluctantly made my way back to the B&B. I didn’t have time to visit the Musée des Beaux Arts, nor a dozen other places of interest on my list. Collecting my belongings from the B&B, I walked the short distance to the train station only to learn that the train was delayed again due to weather conditions. I bought a hot chocolate and a waffle in the food court. I think I gained a few kilos which isn’t surprising considering I subsisted primarily on chocolate, fries, waffles and beer for two days. The trip back to Paris was comfortable and relaxing. Service on that route is operated by Thalys, the high-speed train operator jointly owned by French, German and Belgian national railways. I’ll definitely return to Brussels.

So what took me so long to discover the place? I guess I was busy discovering other places. What I particularly like about this city is its eclecticism – the blend of different styles and vibes ranging from Baroque to Art Nouveau, old-world to avant-garde, rebellious to conformist, flamboyant to austere, all with an underlying quirkiness.