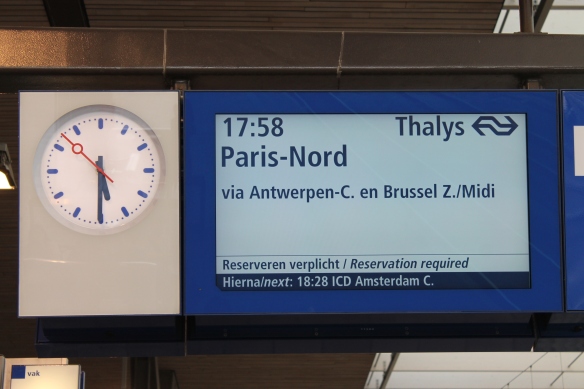 These days, boarding a train at Paris’s Gare du Nord train station involves passing through a phalanx of machine gun-wielding policemen, sniffer dogs, scanners and metal detectors similar to those used in airports. However, in my line-up the scanner wasn’t working, so they just waved us through. And I thought, “What’s the point in having a scanner if it doesn’t work?”

The reason for this heightened surveillance is primarily to dissuade potential terrorists from climbing aboard a train armed to the teeth with weapons, which is exactly what happened two years ago (the horror!)

In August 2015, a deranged 25-year-old Moroccan Islamist called Ayoub El Khazzani nearly opened fire on passengers inside a Thalys train travelling from Amsterdam to Paris. Thanks to the courage, strength and alacrity of three American men, two who were off-duty members of the U.S. Armed Forces, they tackled the terrorist and managed to subdue him. Later, these heros were awarded France’s highest decoration for bravery, the Legion of Honor, by then-president François Holland. This is worth mentioning because these brave men averted a possible bloodbath. Again, the horror! To think that you could be sitting on a European train, or a train anywhere for that matter, calmly flipping through a magazine or chatting with your companion when suddenly a crazed lunatic shouting “Allah Akbar!” and wielding an assault rifle bursts into your compartment is beyond terrifying. But this is what is happening today. Islamic terrorism in Europe (and elsewhere in the world) is defining the beginning of the 21st century. And it is tragic. Governments need to work harder to eradicate this horrendous phenomenon.

Seat prices are cheaper if you book months in advance. I booked myself a First Class ticket, Paris to Rotterdam, for 62 euros. Travel time is two hours and 37 minutes. A snack and lunch are included in the price of the ticket. If you’re travelling solo, ask for a “place isolée” or “place solo” (same thing) which means a single, window seat.

Below is a photo of the mid-morning snack I received. As I was drinking coffee and reading my book, I was listening with one ear to the four New Yorkers sitting across the aisle from me. In their late sixties or early seventies, one of them was telling the others that during her visit to the world’s largest genealogical library in Salt Lake City, Utah, she had been researching her family history. “My maternal grandparents came from Minsk,” I heard her say. Funnily enough, the book I was reading – East West Street – covers precisely that region and era.

“Have you read this book?” I said to them, explaining that I had overheard their conversation. Naturally, a discussion ensued and we chatted amicably for the rest of the journey. (As an aside, I only barge into other peoples’ conversations when I hear they’re North American (or Australian.) Europeans, including the British, tend to be more private and probably resent the intrusion.) 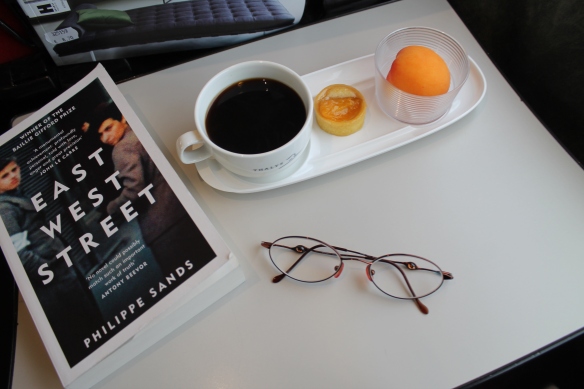 From Rotterdam I took a local train to The Hague (Den Haag), only a 20-minute ride. As I sat amongst the locals listening to the guttural Dutch language, I did a double-take. A man sitting across from me was wearing wooden clogs. Real, farmer-type clogs with a leather strap across the top of his foot. I had (mistakenly) thought that wooden clogs were a thing of the past. I wanted to laugh and take a photo, but that would have been too rude.

At Den Haag train station, I picked up a street map and meandered the narrow streets (dragging my suitcase behind me) in search of my hotel, the Parkhotel Den Haag. A 4-star hotel, it was perfection; better than I had expected. My room overlooked the inner garden and the only sound was the cawing of sea gulls overhead. Den Haag is a seaside town located on the North Sea coast. Those gulls were constant and at one point, days later, I imagined myself in that famous Hitchcock film. (I’m not a fan of large, uncaged birds.)

He looks quite vicious, don’t you think?

Here’s the hotel garden where I spent a few hours each morning (with coffee) and each evening (with a glass of wine) working on my memoir (rewriting some segments.) I have a new editor in Vancouver and he’s a taskmaster.

Be forewarned that Holland is a nation of bikes, and at certain times of the day crossing the road can be perilous. So stressed was I by the flotilla of bikes bearing down on me at breakneck speed, not to mention the clanging of oncoming trams, I was a nervous wreck on my first day. 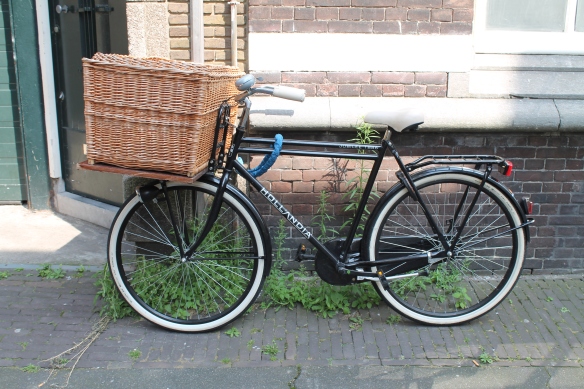 Stay tuned for Part Two: the magnificent Mauritshuis art museum and the buying of cannabis in a legalized coffeeshop. Go back up to top right-hand of this page and click on “Next”.