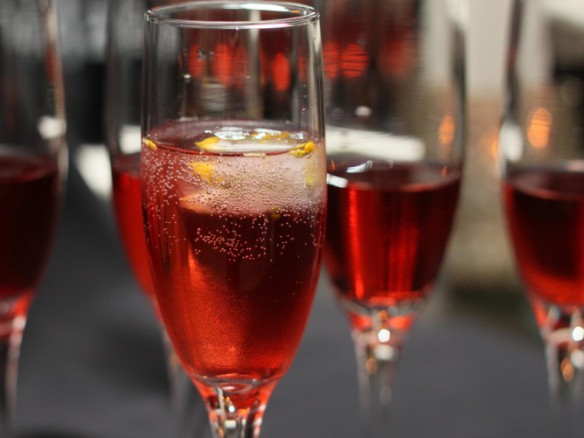 6 pm is officially apéritif hour here in France. In anticipation, and as a reward for my weekend labor, I purchased a bottle of crème de cassis yesterday. Crème de cassis is a sweet, red liqueur made from blackcurrents. Nearly 16 million litres of the stuff is produced annually in the Burgundy region of France. Traditionally, you pour a small amount into a glass of white wine to make a favorite cocktail called kir. The first time I did this, decades ago, I was unaware of the high alcohol content of crème de cassis (18%). With a friend, I poured, giggled and guzzled my way through an entire bottle of wine, copiously fueled with cassis. Then I promptly passed out.

I like to pour cassis into a glass of chilled crémant. From only 5 to 7 euros a bottle, as opposed to 33 euros for a good bottle of champagne, it makes a delicious apéritif with a splash of that blackcurrant (or raspberry) liqueur thrown in. When the wine is sparkling, or if it’s champagne, then the cocktail is called a kir royale.

Under AOC regulations (Appellation d’origine contrôlée), all sparkling wines using the champagne method – but produced outside of the Champagne region – are forbidden to use the appellation “champagne.”

Sparkling wines called crémant are so named because their lower carbon dioxide levels give them a creamy rather than fizzy mouth-feel. In France, there are seven appellations for crémant (an appellation is a protected geographical region):