Fingers crossed that my Eurostar train won’t be affected by the current rail strikes in England. 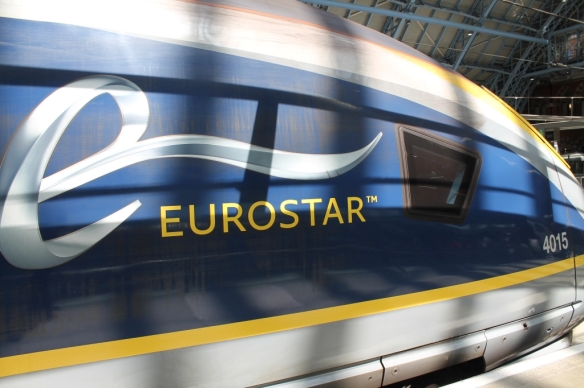 I love London. In fact, I’ve loved London my whole life (and have lived and worked there on two separate occasions.) I often wonder how my life would be different had I chosen to settle there instead of here. For sure, London is HUGE, and far more expensive. Because of its size (population 9,541,000, wow!!), compared to puny Paris (2.14 million), it seems more international and multi-ethnic. Had I decided to settle in London instead of Paris, I guess I wouldn’t be the bilingual woman I am today. And I wouldn’t have experienced all my ‘French adventures’, but English ones instead. Somehow ‘English adventures’ don’t sound as titillating as ‘French adventures’.

Having said that, it’s a fantastic city to visit. From Paris, the high-speed Eurostar gets you there in two hours and 17 minutes (35 of those minutes are in a tunnel which runs beneath the English Channel and connects northern France to southern England.) 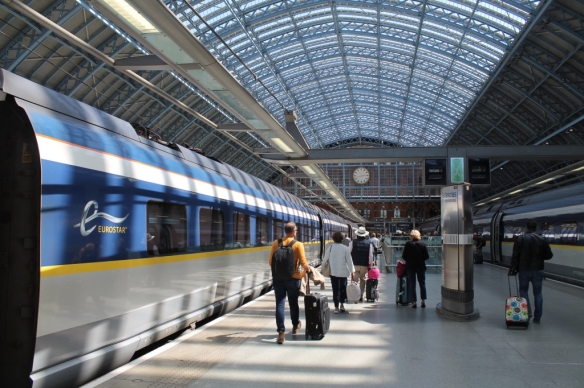 As I said, I’ve loved London my whole life (my parents were English, and I’ve been going there since I was a child.)

London enthralled me. I felt as though I were standing at the intersection of great history, great literature and the great modern English language, a long line of writers, playwrights and poets stretching behind. I registered with a secretarial agency, and within a week was sent out on temporary assignments. Each mission presented new boroughs and districts, all different and thrillingly diverse. I worked in a literary agency in Clerkenwell, a college in the middle of Regent’s Park, an insurance company in Covent Garden, and an investment bank in The City. I loved the freedom and flexibility of temping. I found the English lovely and considerate, their customs quaint and charming, like the office tea lady who, twice a day, came round pushing a trolley with cakes, biscuits, currant buns, and a large urn filled with tea. The happiest sounds of the day were the clinking of chinaware and the rattle of metal wheels as the tea lady rolled the cart out the lift and down the corridor. It was our signal to stretch our legs and gather round for a chat and a mug of tea.

London was an odyssey, a string of euphoric discoveries, and I was a happy explorer, my curiosity insatiable. A map lover, I’d study the sprawl of the Underground, the vast train network that snakes beneath the nation’s capital. There are eleven multicolored lines, and some of the stations read like fictional destinations in a storybook: Maida Vale, Angel, Parsons Green, Piccadilly Circus, St John’s Wood, Seven Sisters, Shepherd’s Bush, Swiss Cottage, Tooting Bec, White City. To me, London was more than a geographical destination; it was the backdrop to my favorite children’s fantasy novels.

Long ago, while strolling down the Bayswater Road with my mother, we passed a stretch of Victorian terraced houses that overlooked Kensington Gardens. I was seven or eight.

“Look,” she said, stopping on the pavement, “One of these is the Darling house.”

Rapt and rooted to the sidewalk, I looked upwards towards the top-floor windows, trying to imagine which one Peter Pan, Tinkerbell and the pajama-clad Wendy, John and Michael had flown out of, on their way to Neverland. “Second star to the right, and straight on ′til morning.”

Oliver Twist. One Hundred and One Dalmations. A Bear called Paddington. Madeline in London. A Little Princess. They were all there, my imaginary childhood friends, roving the streets and squares, prancing in the parks and flying over rooftops. As for Mary Poppins, did Cherry Tree Lane really exist? Years later I looked it up in my A-Z street atlas, but couldn’t see it (which doesn’t mean it isn’t there.)

An excerpt from my memoir, An Accidental Parisian. Copyrighted material.

For those new to this blog, go up to the top and click on LONDON to read a collection of my previous posts on that city.

6 thoughts on “off to London”