What is it with certain men? Do they feel threatened? Weakened? Undermined by the female sex? Is it some sort of power struggle between men and women? Then disempower them, that’s the only solution to the problem. Disempower, demean and deprive women of their fundamental rights. Chasten them for their audacity and their freedoms.

In her book of the same title, French feminist, Simone de Beauvoir, referred to women as The Second Sex.

The American feminist author, Kate Braverman, wrote this – “Women have waited millions of years, growing separate as another species, with visions and priorities no man-words, no man-measurements can comprehend.”

The decision as to whether to continue a pregnancy or terminate it, is fundamentally and primarily the woman’s decision, as it may shape her whole future personal life as well as family life and has a crucial impact on women’s enjoyment of other human rights. United Nations Human Rights

Women’s human rights, which include the rights without discrimination to: equality, dignity, autonomy, information, bodily integrity, respect for private life, the highest attainable standard of health, including sexual and reproductive health, and freedom from cruel, inhuman and degrading treatment. The right of a woman or girl to make autonomous decisions about her own body and reproductive functions is at the core of her basic rights to equality, privacy, and bodily integrity. United Nations Human Rights

Look at this photo of an all-male group of conservative Republicans deciding on women’s health, maternity and reproductive care in the health care bill under Trump. 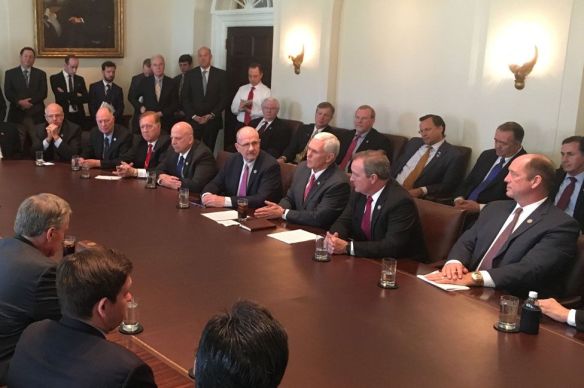 But this is the worst, it sends chills up my spine – 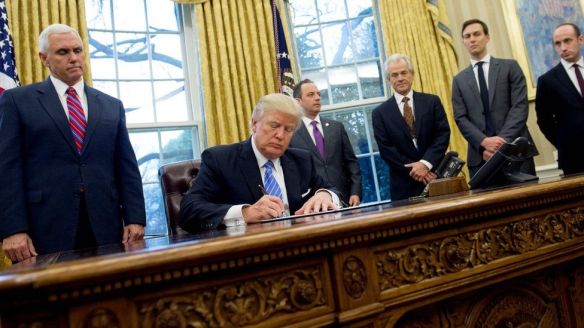 Look at the expression of fierce determination on Pence’s face and Trump’s face; they both seem to be scowling. (The men in the back look kind of embarrassed. I wonder how Jared explained that photo to Ivanka.) What is Trump signing? An executive order to ban federal money going to international groups which perform or provide information on abortions.

On the campaign trail, the formerly pro-choice Republican told MSNBC “There has to be some sort of punishment for the woman” if abortion was banned. Trump later retracted the statement amid a widespread outcry. (BBC)

So that’s what it’s all about, the three P’s. Punishment. Power. Politics.

And I got to thinking. While looking at the photos above, it occurred to me that the same three P’s are going on in some Islamic countries where the veiling tradition is such that women do not wear the veil by choice. Depending on the country, they are forced to cover their heads and bodies.

Shortly after the 1979 Iranian revolution, Ayatollah Khomeini told a reporter “These coquettish women, who wear makeup and put their necks, hair and bodies on display in the streets have done nothing righteous. They do not know how to be useful, neither to society, nor politically or vocationally. And the reason is because they distract and anger people by exposing themselves.”

Women’s bodies are a sexual distraction to men and therefore need to be controlled, in every way.

Saudi Arabia launched its first-ever Girls’ Council in al-Qassim province to improve opportunities for girls there. Here are the members of the Girls’ Council –