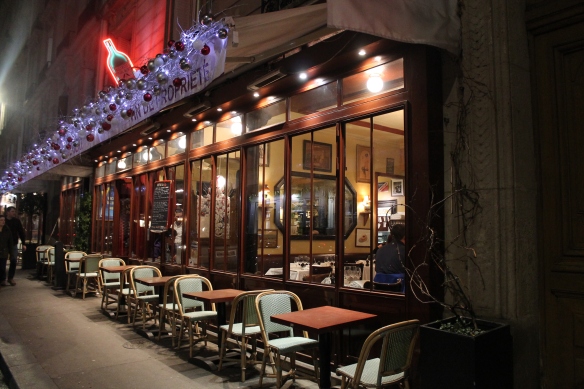 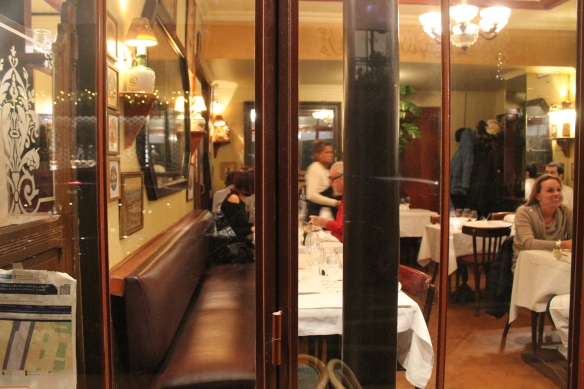 This is my favorite restaurant, hands down. I’ve been going for years, and not once have I been disappointed. Last night – in the midst of the transportation strikes crippling the country – I rode a crowded metro across town to the 11th arrondissement. It’s that time again (what? already?): my upcoming birthday to be shared with my fellow Capricorn friend who is Swedish. We’ve both been living, working and celebrating in Paris for a long time. After a bottle of champagne at his place with his friend, M – also a Capricorn, but a January one – we wended our way through the darkened streets to Bistrot Paul Bert.

The wine list is superlative here, all the French regions are represented. It was an evening “bien arrosé” as the French say, which means well-watered. We started with a Fitou Bel Soula from the Languedoc region: an easy-drinking red with an agreeable fruity nose and red fruit flavors. I ordered marrow bone as my starter. A had a generous slice of foie gras with chutney and M had in-season fresh scallops. 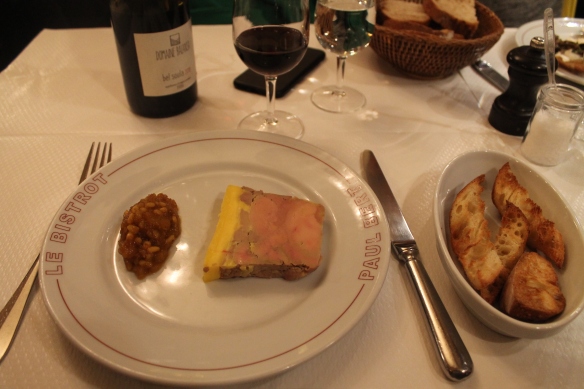 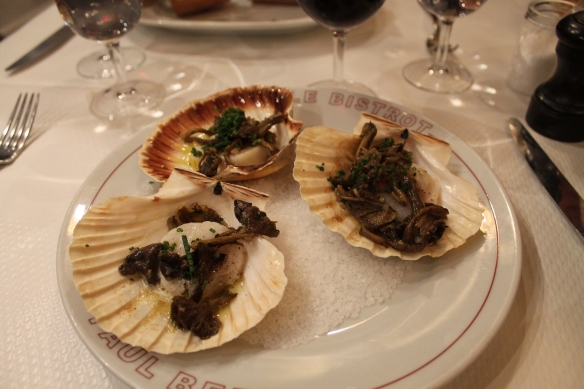 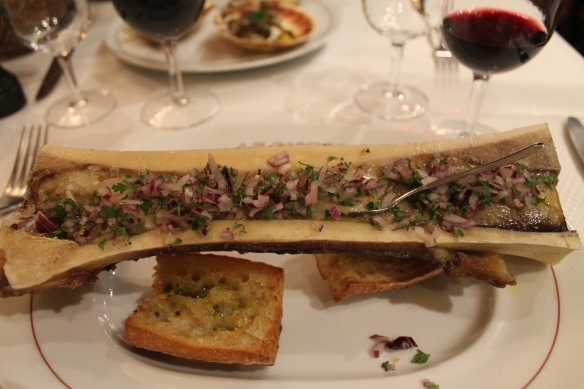 For the main course, A and I shared a massive slab of beef served with their delicious fries. M had something far more original and ambitious: a famous dish called lièvre à la royale. Lièvre is not rabbit, but hare. 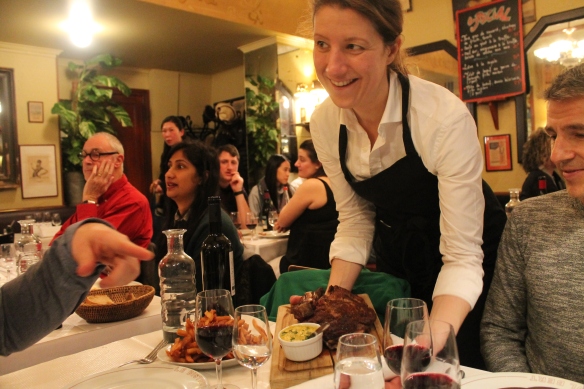 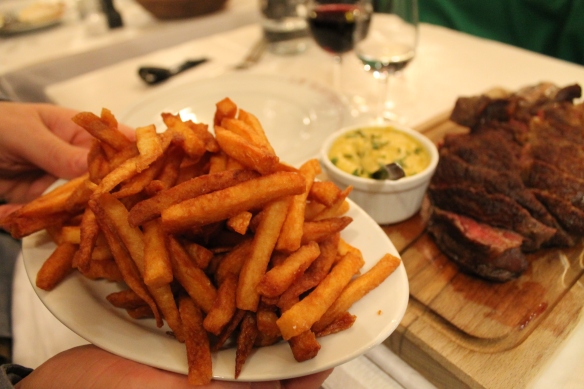 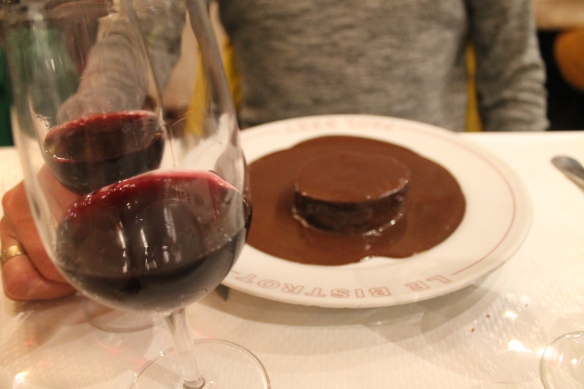 No, it’s not chocolate sauce, but rather a complex blend of liver, heart, innards, foie gras, blood and other things. It’s funny how French people will dig heartily into this kind of dish, whereas the non-French (including myself) tend to shun them. Blood and giant rabbits don’t appeal to me at all. The second wine we drank was even better than the first: from the Languedoc region again, more specifically a small appellation in the foothills of the Cevennes Mountains named Faugère, it was an organic red called Les Fusionels Le Reve. Ruby-colored with floral notes, it was far more ambitious than the previous wine; balanced and elegant. I’m definitely going to look for this in my local wineshop. 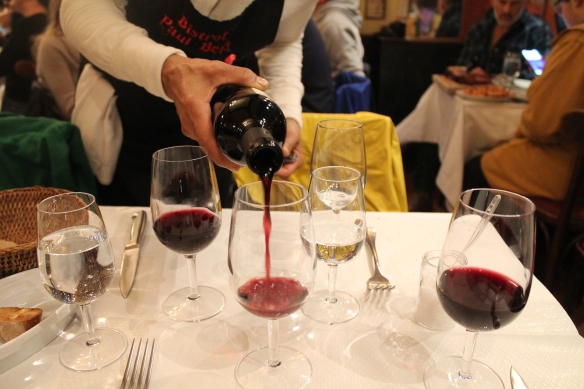 And this is what makes Paul Bert a good restaurant: we had ordered a different wine, but our server said “No, that won’t go with what you’re eating.” She went to consult with someone and came back with the Faugère proposition.

For dessert I had warm apple tart with vanilla ice cream and M had a Grand Marnier soufflé. 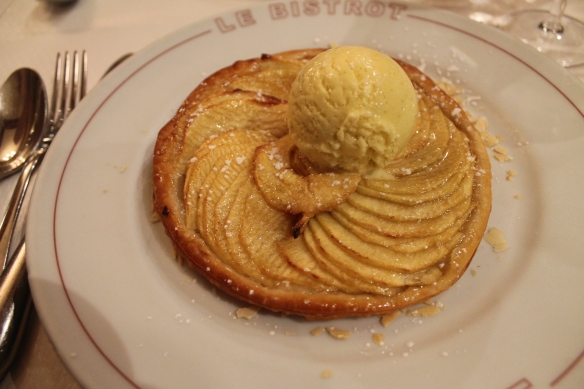 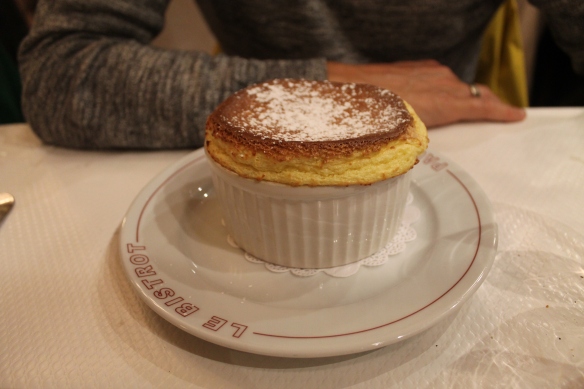 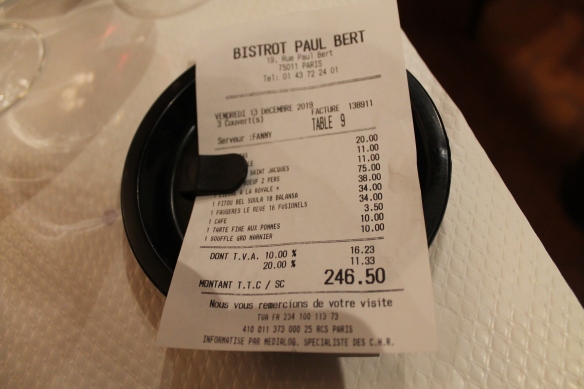 And voilà: another year has passed. Thanks for following it with me.

9 thoughts on “a boozy, pre-birthday dinner at my favorite bistro”