On my way home from work I picked up a bottle of chilled rosé (5 euros, 60). Then to Picard (gourmet frozen foods) to buy an ultra-thin crust gorgonzola-mushroom pizza. It’s chill time in front of my favorite cult series, Homeland. Just got the Season 5 DVDs.

Oh, here’s my 4 year-old godson who has nothing to do with Friday night pizza. I found these photos on my memory card. They were taken two weekends ago when I left London for Lille on the Eurostar train. That’s my expensive Shu Uemura lipstick he has on his face. After finding my make-up bag, he helped himself to its contents. 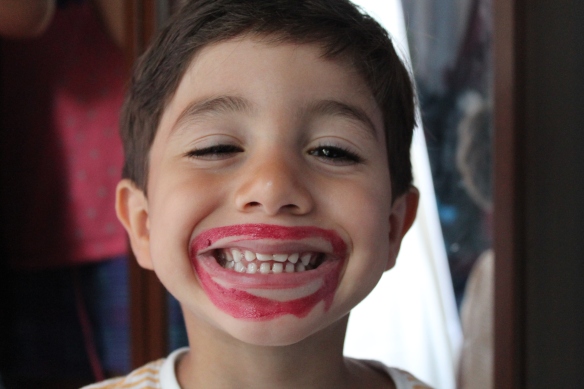 This little boy is the most self-possessed, authoritarian 4-year old I’ve ever known. Yes, authoritarian! (he’s a Taurus). Like a miniature Napoleon, he marches around the house telling one and all what to do. The funny thing is, is that we all obey.

“Tata Juliet,” he says to me in a commanding tone, “I want to take a bath. You can come, but don’t look.”

“OK”, I say, obediently (me? obedient?) and follow him down the hallway into the bathroom. I run the Emperor’s bath, being careful to mix the water so that it’s just right – not too hot, not too cold. He undresses. “Don’t look!” he squeals. But the side of the tub is too high and he needs to be lifted up and placed (delicately) into the water. I reassure him that I’m not looking. What, exactly, I’m not supposed to be looking at…oh, a teeny-tiny penis…since when were 4 year-olds so prudish?

Once in the bathwater, his private parts hidden under a blanket of bubbles, I ask if he wants me to rinse and lather his hair. “No!”, he hollers, “I can do it myself.” “OK,” I say, now sitting on a small stool near the door. I watch as he wets a portion of his head, lathers another portion, then sprays the entire bathroom (including me) with the hand-held showerhead. I’m wetter than he is.

“I want out now,” he announces. His head is sudsy. Getting him out of the tub requires a deft balancing act between my bending down, clasping his slippery little body, then straightening up (yikes, my painful lower back). He clings to me, frog-like, all the while squealing “Don’t look!”

I wrap his body in a large towel and his head in a small one. I place his slippers on the rug. He holds my hand while maneuvering his little feet into them. Le Petit Prince. We emerge from the bathroom, him looking serene and happy, me looking like I’ve been dragged through a car wash (without the car).

10 thoughts on “pizza night, a bottle of rosé, and my godson”