Walking across the Brooklyn Bridge is a truly exhilarating experience. The weather was perfect on Sunday – cold with brilliant sunshine. I left my hotel at 10 am and returned, tired but happy, at 6 pm. I had literally walked for 8 hours straight (with only one sit-down for coffee). Days before I had purchased a super-comfortable pair of REEBOKS at a discount shoe store called DSW. I am truly grateful for having sturdy legs and feet that carry me across towns and cities. I say this because in the past I had had a few quibbles with occasional knee pain, but am happy to say that on this trip I did not experience this. 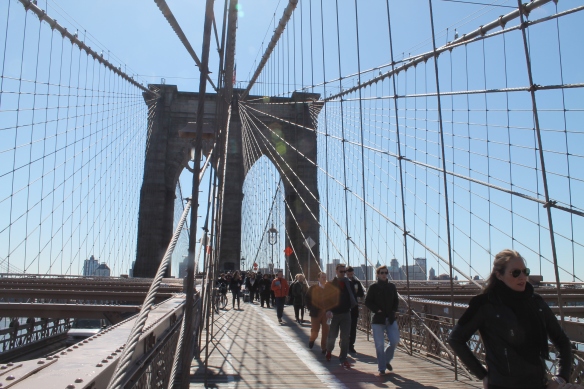 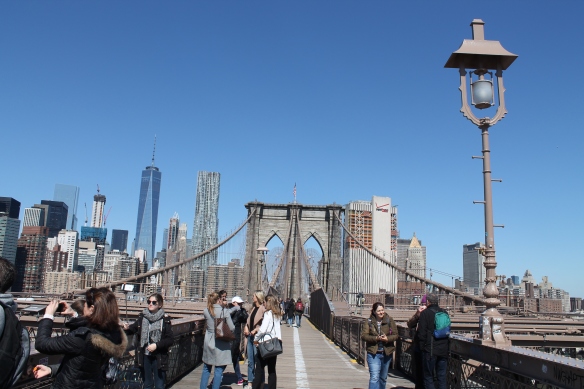 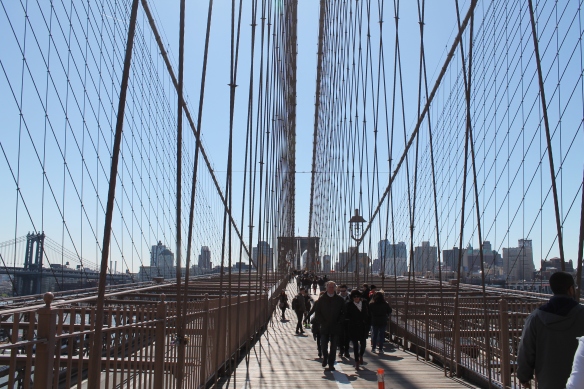 Once I got to the other side, I made my way to Pierrepont Street to visit the Brooklyn Historical Society (a museum, library and educational center.) But the weather was so beautiful, once there I decided to stay outdoors. The Historical Society, though, is worth visiting for insight into the social and political events that shaped the large and incredibly diverse borough of Brooklyn (here it is below). 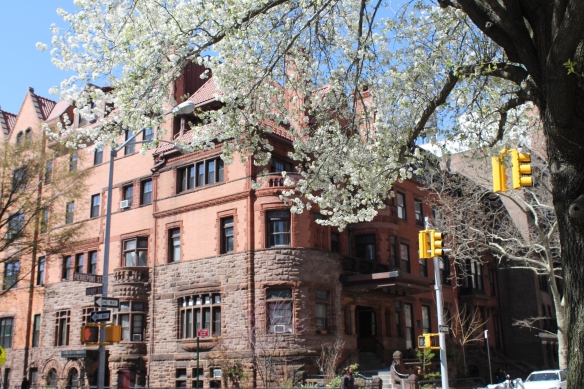 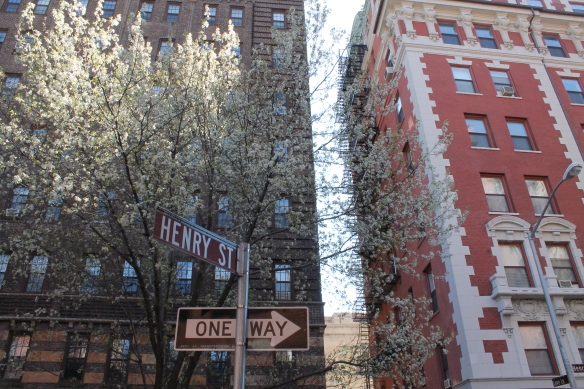 After exploring and stopping for a muffin-coffee break, I caught the subway back to Manhattan, got off at Spring Street and strolled eastwards. 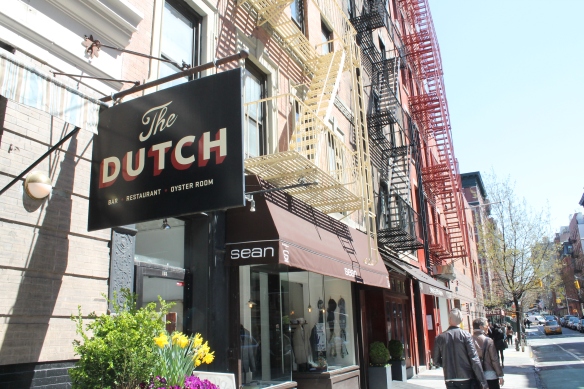 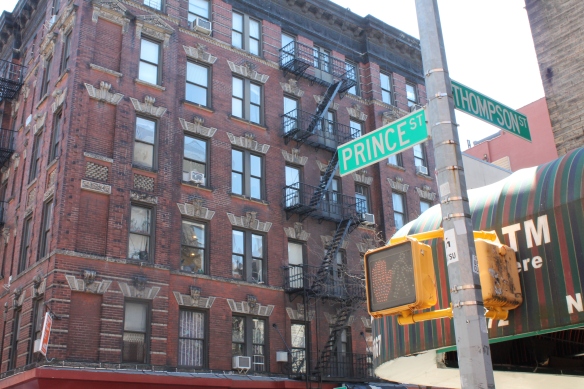 Photographers notice that the light is harsher in North America than in Europe. I couldn’t resist taking a photo of this storefront below. Juju s’amuse à New York! Translation – Juju (that’s me) is having fun in New York! And it’s true. This is when I’m at my happiest: free to roam, camera in hand and pack on my back. 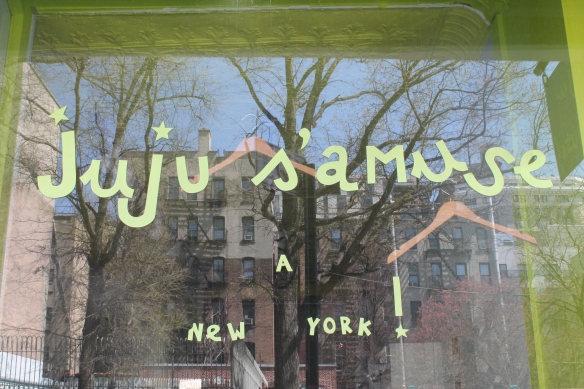 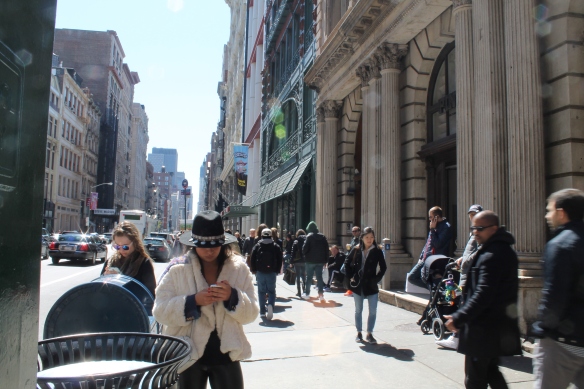 Located at 560 Broadway is the fabulous Dean & Deluca gourmet food store. They have great take-out food and a stand-up eating area at the back. I bought some brown rice sushi, fresh fruit, and a can of soda and stood at the back to eat it. Why can’t I find brown rice sushi in Paris? 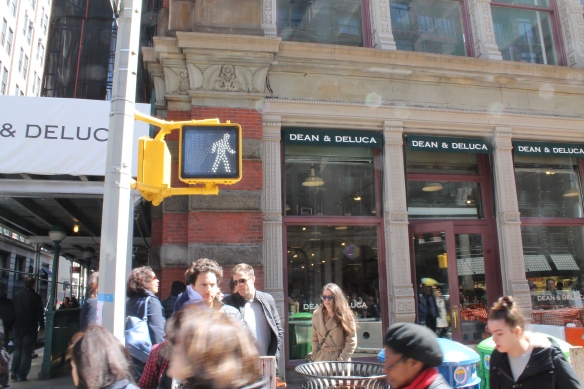 Strolling along Prince, Greene and Mercer Streets, one cannot help but notice the proliferation of luxury brand stores – Prada, Ralph Lauren, Stella McCartney, Chanel, etc., lined on either side. At one point I literally stopped in my tracks and said aloud – How frigging boring! I didn’t come down here for this! What happened to hip, bohemian, edgy Soho? It has turned all sanitized and corporatized. I hate that.

These bland, high-end stores have completely ruined the essence and social fabric of this neighborhood. I thought of Patti Smith and wondered what she would think of her old stomping grounds. I just finished reading her marvelous memoir ‘Just Kids’ which is a salute to Manhattan when she and Mapplethorpe lived here during the late 60s and early to mid-70s. (OK, it’s true that during that era some of those districts were full of tenements and rats, but at least Smith didn’t glamorize.)

Speaking of former rock stars, I had the address of David Bowie.  Out of curiosity, I made my way over to 285 Lafayette Street which was his residence.  Here’s the building here. I’m still affected by his death in January of this year.  I hope he’s looking down at us and laughing. 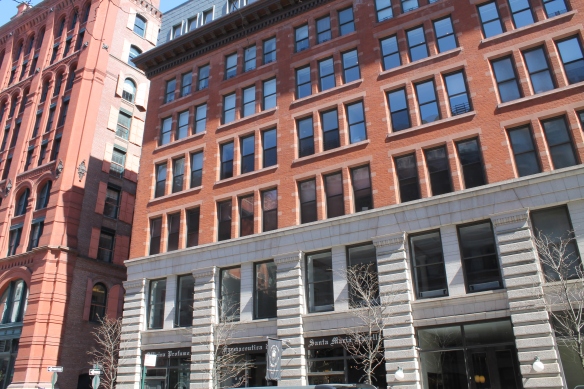 Hoping to find a more authentic district, and eager to get away from those soul-less luxury clothing stores, I continued walking east. The area around Mulberry and Mott Streets is pleasant. There’s a lot written about gentrification: it’s true that there are pros and cons.

For example, NYC throughout the 1970s and early 80s was not only very dirty and in a state of urban decay, but a very dangerous place to be. The city teetered on bankruptcy, there were substantial cuts in law enforcement, rapes and burglaries tripled, car thefts and felony assaults doubled, and murders jumped from 681 to 1690 a year. Graffiti covered subways, buses and just about everything and subway muggings were rife.

Arson was also a big problem which resulted in abandoned blocks and depopulation. So yeah, gentrification turns things around (albeit 30 years later). Buildings and parks are renovated. Jobs arrive, new retail and service businesses appear and crime rates decline. After reading up on the subject, I see that gentrification provides more benefits than disadvantages to the local residents. What I hate is the sanitized look.

Look at these gorgeous historical brick buildings. The light here is fantastic. 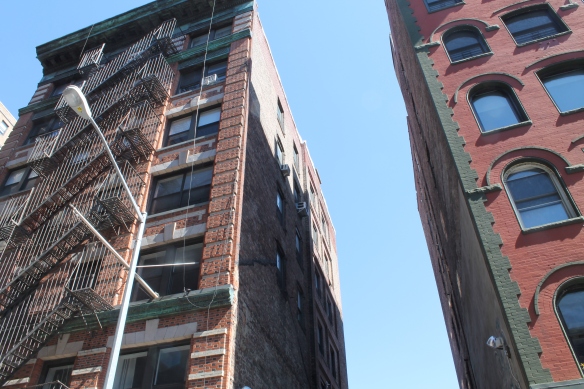 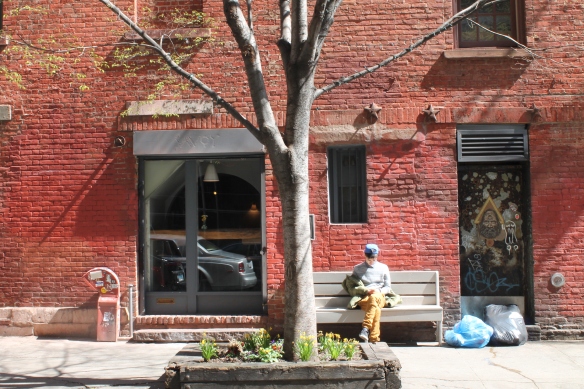 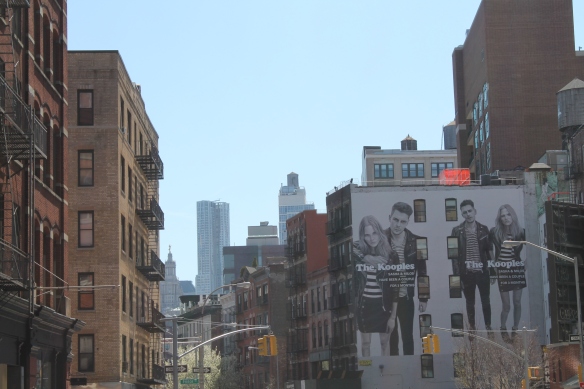 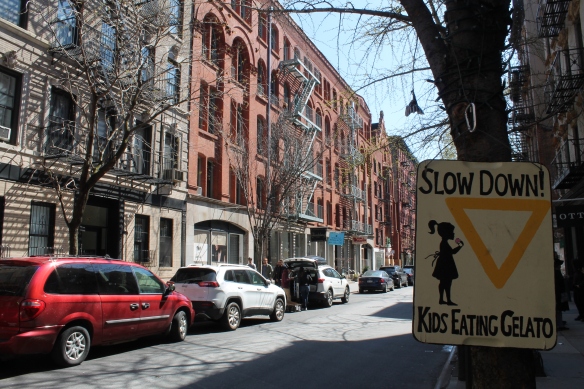 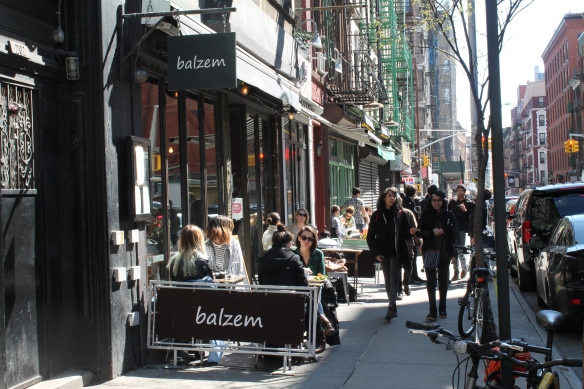 Walking towards the Bowery, Manhattan’s oldest thoroughfare, the aesthetic changes quite dramatically and you find yourself in a grittier setting. But there’s a lot of construction going on and you can see that this once-squalid area in the Lower East Side is and has been undergoing gentrification. I was searching for Rivington Street. 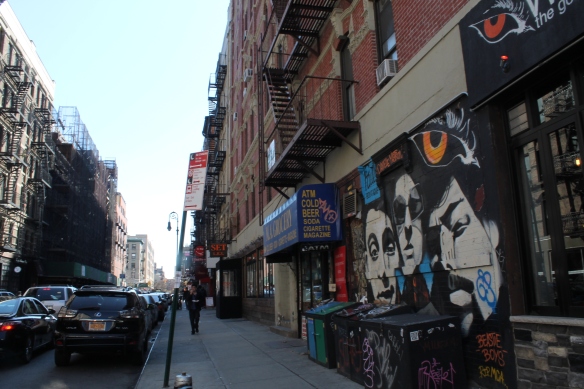 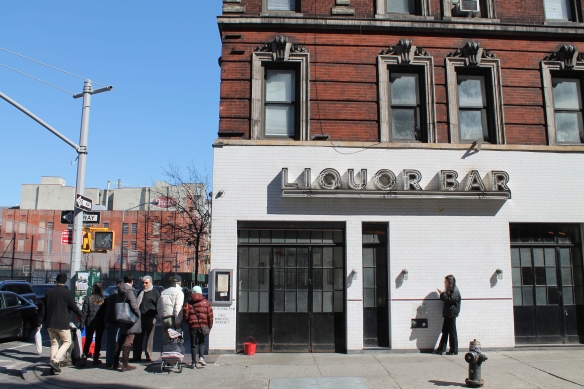 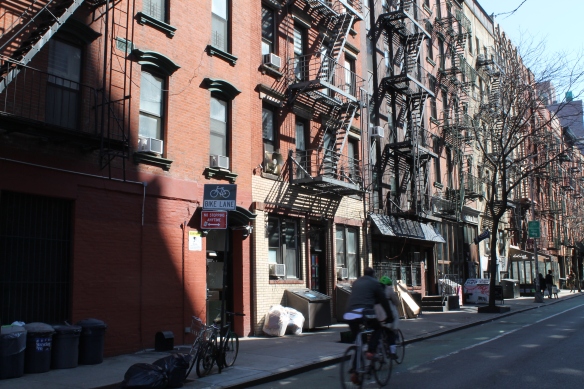 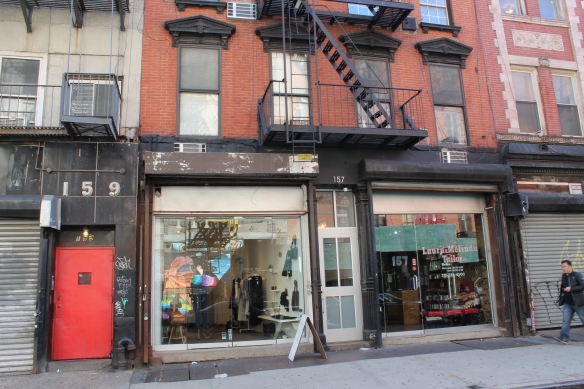 Spying these leather handbags displayed on the wall, I went into this boutique at number 157 Rivington (above) and made a delightful discovery in the name of Szeki Chan, founder and designer of the store called 7115.  Born in Hong Kong, she came to the States at age 12 and later graduated with a BFA in Design and Technology from Parsons School of Design. She has a second store in Williamsburg, Brooklyn. 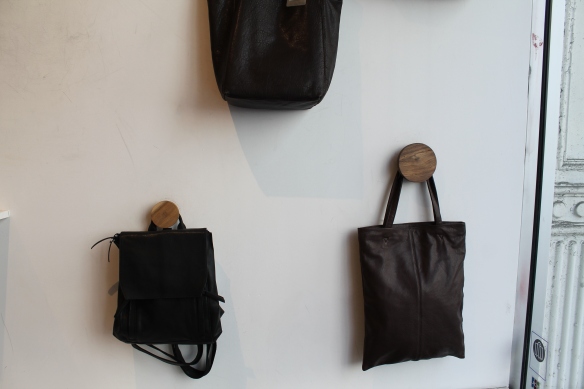 I loved the original designs of the handbags and the quality of the supple leather. We chatted for quite awhile. Szeki told me that her mother makes them and buys the leather from Italy. I purchased one at a very affordable price. And y’know what? I’m much happier shopping in and supporting young independent designer shops than those sterile, high-end corporate chain stores. 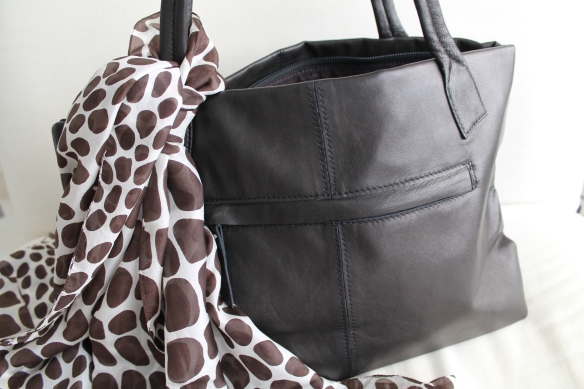 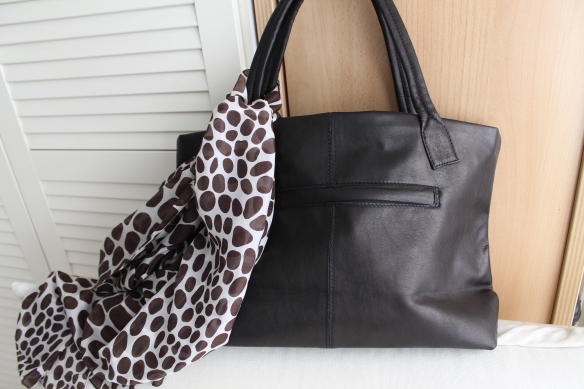 Leaving the store, I headed north towards Houston Street and came across this legendary deli. Remember that famous orgasm scene from the movie “When Harry Met Sally” with Meg Ryan and Billy Crystal?  It was filmed here. 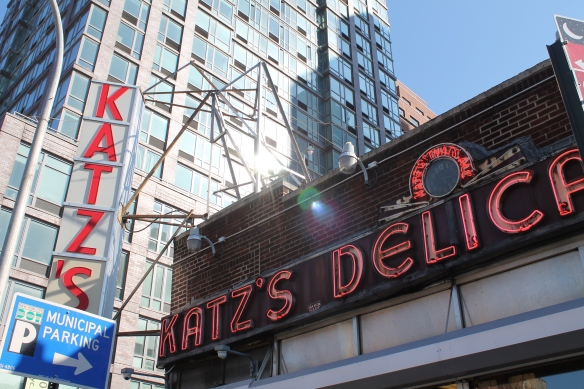 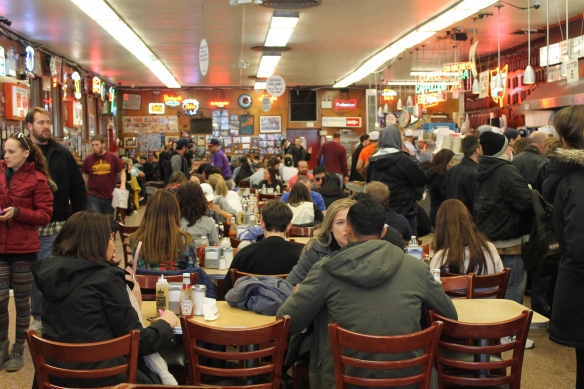 Further along at 179 East Houston is another reputable deli (take-out only) called Russ & Daughters. Known for its high-quality smoked fish, this Lower East Side institution has been operating since 1914. 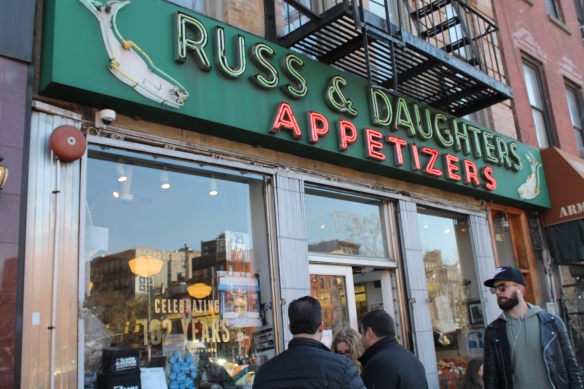 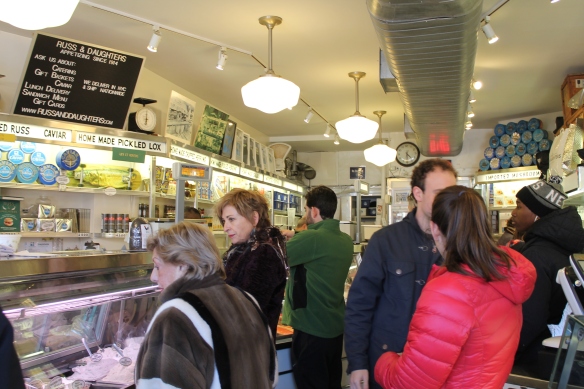 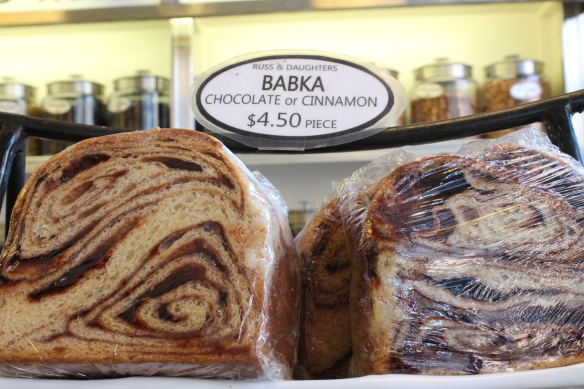 Had my dear mother been alive, I would have brought her a portion of gefilte fish like I used to do when we lived in Toronto and I went to Yitz’s deli. She liked gefilte fish (a poached mixture of ground deboned fish, such as carp, whitefish or pike).  Just seeing it on the shelves made me feel kind of sad.

9 thoughts on “the Brooklyn bridge and Lower Manhattan”