Last week, The New York Times ran several articles on Hillary Clinton’s bewildering involvement in Libya. They were right to do so because probing, unanswered questions remain on the subject. Here are photos of Hillary Clinton in Libya in 2011. Despite the fact that she’s posing with gangsters and militia men capable of ripping your heart out with a bayonet, she’s smiling. She looks pleased with herself as she and her new friends flash the V for Victory sign with their fingers. What was she doing there? And why would an American woman, or any self-respecting woman for that matter, be cohorting with people like these … in Libya of all places?  These photos are chilling.

Based on lies and yielding the same tragic consequences, the U.S.-led intervention in Libya resembled the Iraq intervention eight years earlier: they had no business being there. Here she is smiling again. They’re all smiling, even the young man who is missing a leg.  These images are called photo ops.  Effective propaganda for some.  But really, who do they think they’re kidding? 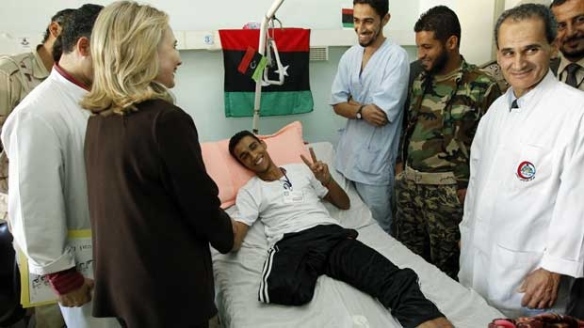 Those weren’t the real reasons.  Far from it.

A few reasons the U.S. administration, spearheaded by Hawkish Hillary, made the decision to oust Gaddafi were this –

The biggest fear was that Libya might lead North Africa into a high degree of economic independence with a new pan-African currency.

So the U.S. (and its allies) blew up Libya, leaving another national wreck, fueling Islamic extremism, and dispersing weapons region-wide. It also opened the floodgates to thousands of migrants heading to Europe on small boats, hundreds drowning along the way.

“We came, we saw, he died,” Clinton laughed as she heard of Gaddafi’s death, (a brutal, savage and sadistic death, possibly perpetrated by those same men she’s seen posing with above.)

She also said this – “We will support a process of democratizing that respects the rule of law, that respects the rights of women and minorities and young people, that creates independent institutions like a free press and an independent judiciary.” Ah yes, the famous “we’re here to establish democracy in the Middle East” fallacy, the biggest untruth of all.

All lies. A more apt description would be “We came, we deposed a dictator who guaranteed stability in the region, we bombed hundreds of innocent civilians, we walked away and left an enormous vacuum behind us.” Today Libya is a failed state (run by hundreds of private militias) and a terrorist haven. Hillary Rodham Clinton, so-called progressive feminist, paved the way for hundreds of women and young girls to be abducted, tortured and raped by armed rebel militias during the uprising.  Not a legacy to be proud of.

Is it any surprise that American Foreign Policy is so hated and mistrusted abroad?

Clinton also promised that the U.S. would provide $40 million to help Libya secure and destroy dangerous stockpiles of weapons. Wrong. Libya fell in 2011 and by 2012 undercover operations were funnelling weapons from Benghazi, Libya to rebels in Syria.  Because the break-up of Syria was next on the Western Neoconservative agenda.

How ironic that the tempest-tossed are washing up on the shores of Europe.

Three years ago the United States and its European allies initiated a bombing campaign that destroyed the regime of Moammar Kadhafi in Libya.  When Kadhafi died, someone said “Do you know what’s been killed?  The entire SAHEL.”  The SAHEL is a zone in Africa that stretches west to east from the Atlantic Ocean to the Red Sea.  It comprises a dozen countries including central Mali, South Sudan, northern Eritrea, northern Nigeria, southern Mauritania, etc.

Since Kadhafi’s overthrow, the Libyan state has ceased to exist and the SAHEL region, bereft of its longstanding chief patron, is dangerously destabilized.  According to Amnesty International, “Armed groups and militias are running amok throughout Libya, launching indiscriminate attacks on civilian areas and committing widespread abuses.”

Now that lawlessness and a long, unpatrolled Libyan coastline has made life easy for smugglers (whereas under Kadhafi’s regime this was not the case), the majority of migrants are flooding in from the SAHEL region of Africa and the Middle East.  For would-be migrants, Libya is now the main transportation hub and a gigantic funnel to Europe.

The human disasters that flow from Western meddling and military interventions in North Africa, the Sub-Saharan region and the Middle East – let’s not even mention Iraq – is a tragedy of Shakespearean proportions.  Many on the receiving end are showing up, displaced and desperate, on the West’s doorstep.