All throughout the 1990s I used to love shopping in the major department stores of Paris: Au Printemps, Galeries Lafayette, BHV and La Samaritaine with its rickety wooden escalators. Back then, those department stores were not only homey and affordable, they were familiar and welcoming as well. Some of the areas were a little run-down (usually the upper floors) – in need of fresh paint or re-tiling – but that was OK. I remember that Au Printemps, on the upper floors, had an old wooden escalator straight out of the 1940s and just wide enough for one person. I found that quaint and charming. Many of the saleswomen were also quaint and charming. But what was most important was that you knew where everything was. Hosiery, shoes, lingerie, bed linens, kitchenware or haberdashery (is that word even used today?) … you knew exactly what floor they were on and nothing had changed for years. The familiarity, not to mention the affordability, was comforting.

That’s all gone now. Nowadays I walk around those same department stores like an amnesia victim. Nothing is where it used to be; nothing looks like it used to be. First off, just to get through the door you have to open your handbag to security guards and submit to a wand scan (France is on high security alert since the Charlie Hebdo disaster). And secondly, since year 2000, all department stores the world over have undergone a complete transformation. Here’s what I came up with after googling “department store makeover luxury” –

Department stores have taken the route of luxury condominiums. They have, in my opinion, become sumptuous, soulless emporiums – antiseptizied, luxurized and, in terms of pricing, astronomized. As a result, ordinary shoppers like myself feel squeezed out. Luxury brands are the new gold rush (jewellery, watches, handbags, accessories, not to mention duty-free services, interpreters and personal shoppers.)

But what if you just want a simple frying pan?

Last week I went to BHV in search of one. The BHV (Bazar de l’Hôtel de Ville) used to have the best kitchenware department in the city – tiny whisks, ramekins, non-stick madeleine pans, porcelein asparagus dishes and truffle slicers – it was all there on the 4th floor. Stepping off the escalator, I automatically headed to the pots and pans section, but it had evaporated into thin air. In its place was a bank of self-serve automated checkouts. During the January sales, I went to Galeries Lafayette in search of a pair of boots. After wandering in vain all over the 4th floor, I was told that the shoe department is now in the basement. I went down but the pounding music, dim lights and low ceiling utterly disoriented me. I fled in frustration, empty-handed, or rather, empty-footed.

The real winners of department store shopping these days are Asian tourists. Here’s what The Guardian newspaper had to say on the subject –

Paris is reaping the reward of an official drive to make the city the destination of choice for hundreds of thousands of increasingly affluent Chinese tourists.

“Let’s be perfectly clear, this is a competition with London, this is a battle between cities. Our goal is that Chinese visitors come to Paris, stay for longer and spend more money,” says François Navarro, spokesperson for the Ile-de-France regional tourist authority.

“Of course, we prefer that Chinese tourists come to spend their money in Galeries Lafayette and not in Harrods.”  In addition to maps and signs in Chinese, Galeries Lafayette also welcomes Chinese shoppers with Mandarin and Cantonese-speaking sales staff and VIP services.

French authorities have gone even further by establishing a visa office in Beijing to help Chinese visitors obtain travel documents quickly and easily.

The Chinese, whom Navarro describes as “the kings of shopping”, want “luxury shopping above all” and “have an idealized and romantic vision of Paris”. Paris claims to attract more international visitors – around 17 million – than any other city in the world, including one million Chinese tourists annually, compared with an estimated 110,000 Chinese visitors to London. 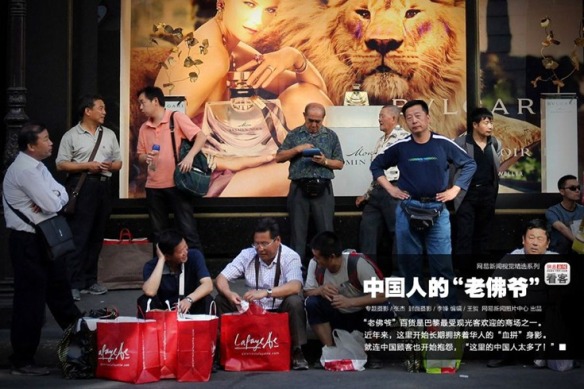 In 2013, Galeries Lafayette opened its first Chinese store in Beijing.

Now, back to my frying pan which was the genesis of this story. I ended up buying one in Lille – a white ceramic one for 15 euros while shopping at Carrefour.

15 thoughts on “department stores in Paris, Chinese shoppers, and searching for a frying pan”