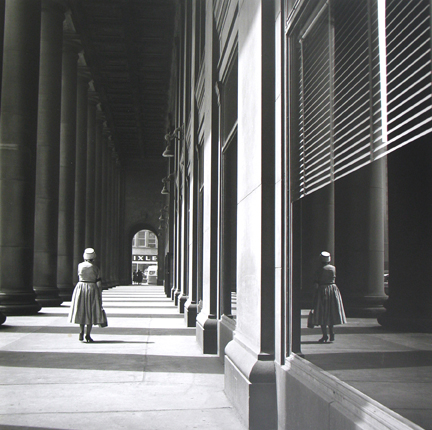 Vivian Maier, an American street photographer, was born in New York City in 1926 but spent much of her childhood in France. After returning to the States, she moved to Chicago in 1956 where she lived until her death in 2009.  Her talent is comparable with that of the major figures of American street photography such as Lisette Model, Helen Levitt, Diane Arbus and Garry Winogrand.

Unfortunately, the current exhibition showcasing Maier’s work is not being shown in Paris, but in Tours (in the Loire region, but easily accessible on the high-speed train on a day trip.)  Take a look at the link below to see more of Maier’s photos, and also to see the upcoming agenda for the Jeu de Paume arts center located in the Tuileries Gardens. Opening on February 11th, 2014 is an exhibition dedicated to American photographer, Robert Adams.  He was born in Orange (New Jersey) in 1937.  He grew up first in Wisconsin and then Colorado where he lived for over three decades before moving to Oregon. Since the mid-1960s, Adams has been considered one of the most important and influential chroniclers of the American West.  Click on link below.